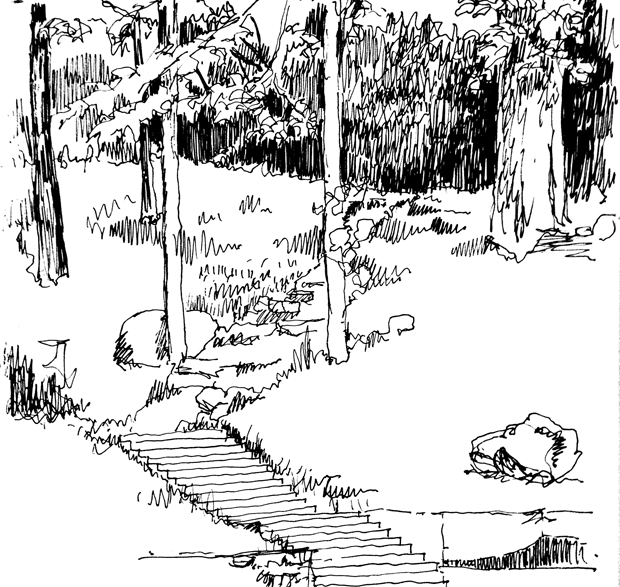 Living from trust, magic and play means stepping out of received ideas and habitual thinking about will and action, goals and results. Recently, a friend told of an event that happened in Costa Rica, during a period of crisis and change in her life. Working for an eco-tourism project, she was on the beach sketching a logo, thinking about an image from a well-known children’s book. Pretty soon, a shadow fell over her, belonging to a man who questioned why she was working in this beautiful place. Sure enough, the man was the author of that famous book.

When things like this happen — as they do, to all of us — I’m often amused, sometimes a bit bemused. It shakes up my usual concept of time, of cause and effect. I have come to accept such occurrences as confirmation that I’m on the right track, though I may have no clear idea of where, exactly, I will end up. These events are usually so singular, an entire exchange with someone well met takes on a heightened quality.

We call such non-causal events “coincidence” or “synchronicity,” the latter word coined by the psychologist Carl Jung to describe a unique moment “falling together in time,” a special alignment of nature and psyche, outer and inner realities. He worked hard during his lifetime to wrestle what might be called magical thinking into a scientific framework. The work continues, with complexity theory, complex adaptive systems, and emergence being the latest buzzwords.

I’ve been wondering lately how I might court these events more actively. It’s a paradoxical idea, because an element of allowing, almost of passivity, seems to be required. Jung was profoundly influenced by Eastern thought, for instance, the I Ching, which is full of advice along the lines of waiting and doing nothing:

“The East bases much of its science on this irregularity and considers coincidences as the reliable basis of the world rather than causality. Synchronism is the prejudice of the East; causality is the modern prejudice of the West. The more we busy ourselves with dreams, the more we shall see such coincidences—chances. Remember that the oldest Chinese scientific book [the I Ching] is about the possible chances of life.” ~ Carl Jung, from Dream Analysis, 1928

In the non-doing, there is still plenty to do. Think of sailing or whitewater kayaking, where you put yourself in the flow of forces far beyond comprehension, let alone control. You have a role, that of steering, operating sails, balancing body weight, judging the course, while also giving over to being carried by the wind and the current.

These occurrences can never be orchestrated or engineered by us alone. All I can do is pose questions, listen for suggestions, act on them, and notice what happens. So far, my experience of synchronicity and coincidence has been delightful, though inconsistent and random, which quite possibly is the nature of it. I have a theory that I notice only a tiny fraction of these events, though when I do they never fail to impress and even to amuse me.

Along with allowing, alignment itself seems to be another key. The more aligned I am with my deepest desires, with dream work, with Spirit / divine source / grace, with gratitude and the reciprocity of relationships, the more frequent the coincidences. An ever wider circle is drawn around my ordinary life, so that even “normal” events become synchronous, and apparent fragments and details knit themselves together into a beautiful wholeness.

Alignment is an ancient technology that can be practiced in the body itself. In the Tantric imagination, universal knowing resides in the back body, while our unique personality and intelligence is in the front. Think of how easy it is to recognize someone by their face, where you might not spot them from behind. The key to balancing these two energies — universal and particular — is in the alignment of front and back, left and right, along a central channel of energy that runs through the body.

Dynamic balance of opposites, integration of universal intelligence, and intentional alignment to a central purpose sound like a good way to live life. In Improv, they call it “group mind” when everyone in a sketch seems to act as one, tapping into a greater intelligence that flows between us, beneath the surface. My will melts away and I become an instrument of response and offering, part of a whole that is dynamically and continually emerging. It’s a grand synthetic act, to plug into this magical weaving of relationship and attunement.

My friend who met the children’s book author confessed doubts about her ability to navigate life any other way, which reminded me of how counter-cultural this is. There are practical considerations to living in a time of both/and; we must be nimble, able to flit between a state of grace and willful activity, yet without trampling the delicate threads that bind every living thing to the world of spirit.

I think of it as “all-in and a light touch,” which has been my writing mantra for a few years now. Recently, I learned the Sanskrit term, vairagya, which translates as “dispassionate passion,” a quality of fiery dedication married to calm contentment and release of outcome. This is a good frame of mind to court synchronicity, if such a thing is possible. And to become better at recognizing it when it does happen.

5 thoughts on “Speculations on courting synchronicity”