I’m not in the same league of erudition and wisdom as Aldous Huxley, nor as full in experience (not yet, anyway). I don’t have his masterful wit, nor have I taken mescaline, about which he wrote beautifully in 1954’s The Doors of Perception. In an odd way, his final novel, 1962’s Island, is the book I was trying to write for three years. And would have written, had I not found wise teachers of Story craft and other guides and critics who came along at just the right time to ask questions like, “Do you want other people to read this?”

For all its density, I did love Island as an intellectual exercise. I learned a great deal about Eastern philosophy, especially appreciating the mash-up concocted by Huxley with the best of modern Western scientific inquiry and intellectual rigor. In his fictional island of Pala, over 100 years, the residents have built their culture out of the best of all worlds, picking and choosing from Buddhism, Tantric philosophy, Enlightenment skepticism, and scientific method to name a few of the influences that go into the Pala stew. END_OF_DOCUMENT_TOKEN_TO_BE_REPLACED

I am one of those cautious people who resist speed. I harden up in fear and can’t relax into it, let alone feel the thrill and joy of being on the edge or out of control. I had a flash of insight this morning after a heart-opening yoga class that my problem with speed extends to a wish to stop time from passing so quickly. The correlation drew me in and showed me something surprising.

I had had a late night, one of those unavoidable parenting experiences that at first I resisted. Once I acquiesced, the night was quite revealing. Our 13-year-old son had taken the light rail with a friend downtown, to attend the Orioles game. The O’s (who’ve been in a long downhill slide since July) scored ten runs in the bottom of the eighth inning. That’s two grand slams and a couple more homers just for good measure. All those at-bats take a lot of time. My son’s friend had already fielded his own father’s warning that they must leave after the seventh inning or find another way home. The friend volunteered me; they stayed, and were rewarded with a spectacular homer-fest. END_OF_DOCUMENT_TOKEN_TO_BE_REPLACED

As a resident for the last twenty-five years of Baltimore, I have spent many days on the Chesapeake, usually in a sailboat. Like many Marylanders, I am acutely aware of the state of our great estuary and her many tributaries. The Bay is a complex ecosystem, her watershed sprawling over parts of six states, including major urban areas and ports, intense suburban development, industry and farmland. Many organization, locally and regionally, have been toiling for decades to raise public awareness and do restoration projects. A recent report card gives the Bay a D+ and includes this language:

“All of us, including our elected officials, need to stay focused on the Blueprint, push harder, and keep moving forward.”

Pushing harder is the mantra of the human-centered mindset that has been destroying the Bay since French and Spanish explorers came through in the 1500s, followed by Englishman Capt. Smith’s expeditions in 1607. It’s time to try something new. Or ancient. In this uncharted territory of climate change, species extinction and the general breakdown of our old cultural stories, imagining new pathways is a first step towards taking them. END_OF_DOCUMENT_TOKEN_TO_BE_REPLACED 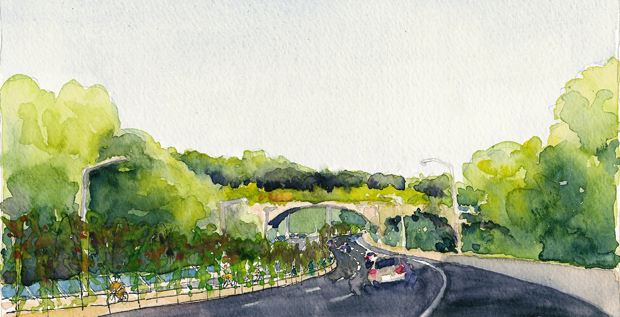 These are the players who sow doubt in the public’s mind about the credibility or consensus of the scientific community around a specific topic. They do this to stall or scuttle environmental and health regulations. They started with tobacco, then moved on to toxic chemicals like flame retardants, and now are using the same proven techniques on climate change. The film employs imagery in creative ways. A sleight-of-hand magician demonstrates misdirection and murky banks of hidden files signify the “playbook” of confusion and lies. Archival footage of experts is intercut with contemporary interviews of the same people, to dramatize the passage of decades, the sweep of lives dedicated either to scientific study or to its obfuscation. END_OF_DOCUMENT_TOKEN_TO_BE_REPLACED

Thirty-six years ago, President Carter made a televised speech during prime time. It was a political disaster, and has since been called derisively the “Malaise Speech.” It’s available on YouTube, but I ran across it watching Michael Moore’s 2009 film, “Capitalism: a Love Story.” The speech is fascinating, in an anthropological kind of way. Carter looks so wooden and sincere up there, shaking his fist to occasionally animate his otherwise stiff body.

After telling his fellow Americans how upset he is about the low ebb of our national self-confidence, he launches into his advice. From the perspective of over twenty years in the green movement, his words are eerily familiar. He proposes using energy as a rallying point to renew America’s confidence and spirit, along with our economy. What was it about this bald truth-telling that equated to political suicide? He clearly did not display the gift of rhetoric that several of his successors did, but I think it was a deadly mixture of message and delivery that doomed him. END_OF_DOCUMENT_TOKEN_TO_BE_REPLACED

In politics and advertising, there’s an old saying: Whoever controls the story, wins. Campaign advisors speak of “framing” a story, of “getting ahead of” stories, “firing the first shot” against their opponent. This appropriation of Story to sell things—whether face cream or a financial bailout or a candidate—is a debasement of the magic and power of storytelling. One favored tactic is to reduce individuals to cartoonish generalizations, as some Presidential candidates are currently doing with immigration.

Michael Moore’s 2009 film about the financial crisis uses just the opposite technique, weaving a story from honest conversations with real people. “Capitalism: a Love Story,” is told in his signature quirky, gloves-off style. In the opening sequence, he intercuts an old classroom film about the Roman Empire with contemporary images of poverty, homelessness, backbreaking labor, and entertainments used to divert the people’s attention from the true state of things. It’s a brilliant commentary not only on how far we have fallen, but on where we might be headed if we don’t take an honest look at the stories we live by. END_OF_DOCUMENT_TOKEN_TO_BE_REPLACED