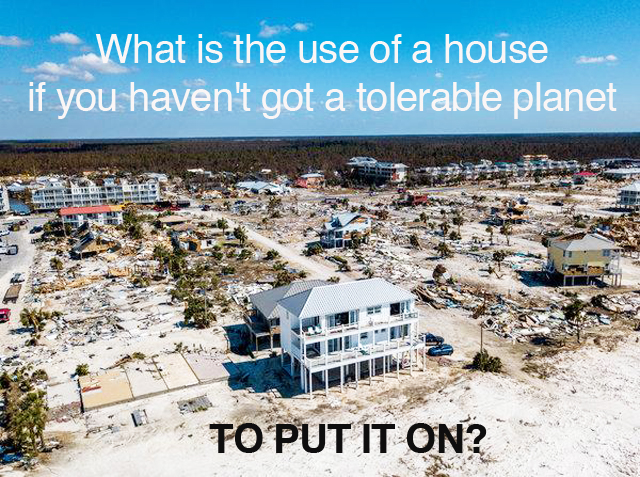 Yesterday, in my Ecological Design Thinking class, I showed a couple of images of the iconic Sand Palace, the reinforced concrete house that is still standing in Mexico Beach, FL after Hurricane Michael slammed ashore with 155-mph winds that flattened the rest of town.

I asked my students to consider what questions this raises about building in a place like that, the lengths this owner and his engineer went to, etc. One student from Florida said it showed foresight and was a smart way to build in this day and age. Why not exceed current code by twice the wind load? Instead of Florida’s 2002 code requiring a house in that place to withstand 120-mph winds, this one is designed for 240-250 mph.

Something about it bothers me, though. What does it mean that this one resilient house survives and everything else around it is destroyed? What is the point of this lone house in a place where nothing else is working? In a place absent of connection and reciprocity?

At first, I thought my response was resistance to shifting my thinking from prevention of climate change to mitigation and adaptation. I wondered if my mindset was still stuck back in the late 1980s when I first learned about all this and had confidence that we can turn it around in the next ten years, no problem.

I’ll admit that some residual optimism hasn’t fully burned in the dumpster fire of the current administration. A trace of idealism hasn’t yet fallen to other realities like the recent UN Climate Report. (A report that I have even to download, let alone read. I tell myself I’ve been too busy, but to be honest I’m scared. I’m clinging to one remaining shred of hope right now, in order to function.)

Our culture is obsessed with the heroic object. We worship things that we make out of stuff we pretend we can mine and cut and smelt with no consequences. We tell the story that all the materials of this earth are here for us alone. This is how we fail to consider the system, the context within which we live.

It is madness to believe that we are exempt from the vast, ongoing, awe-inspiring process of the living earth. We are as fully embedded as that hurricane. And far more destructive.

Humans are social creatures. Our natural habitat is community. A lone house standing all by itself is not heroic. It is a sign of our separation, our man-versus-nature mindset. And as we separate from that thing out there called “nature,” we also separate from each other. It’s every man, woman and child for him or herself.

My reinforced concrete house is still standing, while yours is a scrapyard.

This lone house standing on a Gulf beach in the Florida Panhandle is a sign of our superiority as a species? Proof that our technology really can save us? It’s an absurd narrative. And yet it’s a critical touchstone for many. We are dearly invested in the notion that we can engineer our way out of the problems that we ourselves are causing.

Sure, the Sand Palace is still standing. That owner “won.” He made Hurricane Michael his bitch. He could afford to spend twice the norm to build a beachfront house. How much of a model is that?

Just as the poet Audre Lorde observed that “the master’s tools will never dismantle the master’s house,” neither can they build enough master’s houses to protect everyone who is and will continue to be affected by climate change.

In this time of weird weather, social disruption, refugee caravans, civil wars and wildfires, I’m rededicating myself to question these narratives of our heroic conquering of nature. I can’t resist pointing out the very thinking that got us into this mess.

We need a new story, one that includes everyone, not only those with the means to pour concrete over steel bars in the path of ever-worsening hurricanes.

One thought on “Pathos or palace?”