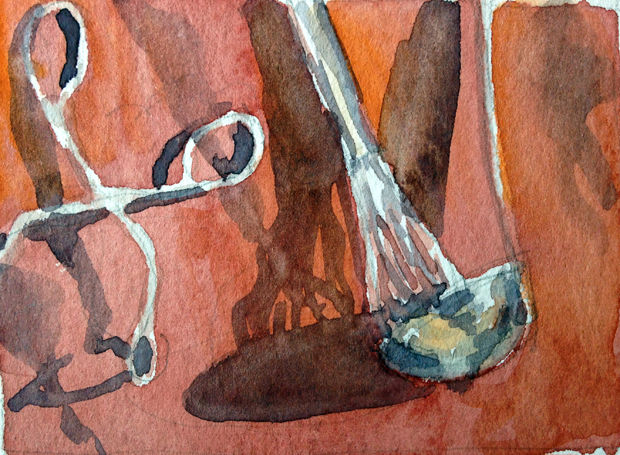 “For the master’s tools will never dismantle the master’s house. They may allow us to temporarily beat him at his own game, but they will never enable us to bring about genuine change. Racism and homophobia are real conditions of all our lives in this place and time. I urge each one of us here to reach down into that deep place of knowledge inside herself and touch that terror and loathing of any difference that lives here. See whose face it wears. Then the personal as the political can begin to illuminate all our choices.” ~ Audre Lorde, 1984

The resonance of our inner callings with needs and trends in the outer world seems to be gathering momentum lately. In this time between stories, I am being urged, by both interior and exterior promptings, to value my unique voice and speak up more. The signs I get range from encouragement like Audre Lorde’s 1984 speech, to learning from Priscilla Ward’s eye-opening essay about her experience as a black woman, to the fierce witnessing of Nell Bernstein in this interview about her book on juvenile incarceration, Burning Down the House.

At the time of Audre Lorde’s speech, I was just graduating from college, looking to work a year in a firm before grad school. Very much playing the game by the rules. Ronald Reagan as President was busy dismantling the social safety net so carefully woven over the last decades. The Soviet Bloc countries boycotted the summer Olympics in Los Angeles. Feminism had been around for a couple of decades. Though I did not identify as a feminist, I was entering a traditionally male profession, slipping noiselessly if unconsciously through the access hard-won by my sisters before me.

Four years later, in 1988, Riane Eisler would publish a seminal book, The Chalice and the Blade: Our History, Our Future, recounting the origin of the subjugation of goddess cultures under the hierarchical, warring, exploitative cultures that birthed our own. She followed it twenty years later with The Real Wealth of Nations: Creating a Caring Economy. Both books chart a way forward that returns compassion to a place of honor in our culture, that celebrates the nurturing and life giving of the feminine. They are essential reading for our time, if we are to recover what has been lost.

“The world will be saved by the Western woman.”

The Dalai Lama made this provocative statement during a panel of Nobel Peace Prize laureates at a peace summit in Vancouver in 2009. He observed that women are naturally more compassionate. Women are more likely to work to alleviate suffering in areas of conflict and poverty, or to restore justice to the oppressed. Microlenders tend to focus on women in developing countries, because they reinvest their profits in family and community. Maybe the Dalai Lama was also observing that Western women have resources, education, reproductive freedom, and tremendous mobility. We can—and do— go where our hearts lead us, and increasingly we are speaking up.

Witnessing is a powerful act, both for the compassion it brings to those who are suffering and for the disruption of old cultural stories—exposing them for their destructiveness, hypocrisy and insanity. Deborah Jiang Stein, who wrote Prison Baby, works with incarcerated women, and draws attention to the plight of babies born behind prison walls—as she herself was. Her prison visits uplift women with her strength and love, and bring hard truths to those of us on the outside who are likely ignorant of their stories.

Anticipating a recent trip to the prison in Framingham, Massachusetts, Deborah wrote that it is at 145% capacity. Built in the 1800s for 452 inmates, now almost 700 women are incarcerated there. The majority are mothers, and most are in for drug related offenses. Two-thirds have untreated mental health conditions. Such utter lack of compassion is difficult to face, but the stories must be told and the questions asked.

This is daunting, paradigm-shifting work. These systems of control, domination, and subjugation are so big and complex they seem immovable. Fortunately, we have Donella Meadows to advise, from her brilliant essay, “Leverage Points: Places to Intervene in a System”:

“So how do you change paradigms? Thomas Kuhn, who wrote the seminal book about the great paradigm shifts of science, has a lot to say about that. In a nutshell, you keep pointing at the anomalies and failures of the old paradigm, you keep speaking louder and with assurance from the new one, you insert people with the new paradigm in places of public visibility and power. You don’t waste time with reactionaries; rather you work with active change agents and with the vast middle ground of people who are open-minded.”

That vast middle ground houses many reasonable, kind people. Most of them are probably going along with the status quo because the alternative is still a terrifying unknown to them. My calling is to tell the stories of the new paradigm. I love to find and share examples from Eisler’s “caring economy,” people who are reweaving the fabric of their local communities. I am drawn to paint beautiful, enticing pictures of how we can live when we wake up to our interdependence with the whole of Life. Meanwhile, others carry on the important work of pointing out the anomalies and failures of the old stories.

Here’s a stellar example of one such witness, Nell Bernstein, author of 2014’s Burning Down the House. The outrage in her voice during this interview on Fresh Air glows just beneath the surface, so powerful as she tells the stories of kids who are locked away in juvenile detention centers. She has uncovered the ugliest truths imaginable, well beyond the depressing fact that we spend $88,000 per year to incarcerate juveniles, far more than we spend on their education.

“I don’t want to overdo it with statistics, but one that really shocked me is that the greatest predictor of adult criminality wasn’t gang involvement, wasn’t family issues, wasn’t delinquency itself. The greatest predictor that a kid would grow up to be a criminal was being incarcerated in a juvenile facility.”

The interviewer brings up a Congressional investigation of sexual abuse in these facilities and asks what did it find and what resulted from it? Her answer speaks for itself:

“You know, I think if we lined all the Congressional investigations of these places up they would circle the earth several times. The degree to which we know that this is happening is staggering. We have a Federal law PREA, the Prison Rape Elimination Act, which includes adults and juveniles and has taken ten years to get even to the implementation phase. But, to me, the idea that we need a special law telling adults not to rape the kids that they are in charge of is just stunning. What did the investigation reveal? It revealed that 12% of kids, at least, are being abused inside these facilities, and that there’s a general culture of impunity. I can count on probably one hand the number on instances in which a guard was actually prosecuted for raping somebody in his care.”

One the darkest core tenets of the old story of Separation is that there are “Others” outside of us to whom we are superior. At its most pathological expression, those Others are considered subhuman, not worthy of basic decency. They are fair game for any predatory behavior and exploitation. You and I may not treat people this way, but we are part of a culture that does. So we are just as complicit—and as tainted—as the perpetrators. We may feel powerless to change such entrenched inhumanity, but there is something very important we can do that Audre Lord advised in her 1984 speech:

“I urge each one of us here to reach down into that deep place of knowledge inside herself and touch that terror and loathing of any difference that lives here. See whose face it wears.”

Yes, we have a long way to go. Nell Bernstein points out that American rates of juvenile incarceration, compared to the rest of the world, “are off the charts.”

“Despite the fact that rates are actually going down in the U.S., we are—I don’t know—seven times ahead of our closest competitor, which may be Somalia. And when you compare us to European countries, we’re literally off the charts. Other countries look at what we’re doing and are just astounded that we use incarceration at the rate that we do, and for the range of ‘offenses’ that we do.”

The embrace of feminine powers of nurturing and witnessing, of unflinching truth telling, righteous anger and compassionate action, are not restricted to women alone. The Dalai Lama’s quip can be read on a more symbolic level: tremendous, transformative change is coming through the widespread embrace of feminine values and harnessing of Western resources. I am deeply grateful to those who model the courage and tenacity to speak up and tell the truth. They are beacons for the rest of us.

One thought on “Our voices, our power: women’s paradigm-shifting work”