I’m shocked that in this day and age you’re actually advising people to send their kids outside.

It’s all I can do to manage to send my 8 year old boy back to school every Monday—what with all these school shootings going on. I’m not sure its the safest thing to do. But it’s a lot safer than just letting him run loose outside. There are whacky people with guns out there too, not to mention the religious fundamentalists who cast spells on kids minds and they end up in some cult somewhere. And kids die of bee stings every year. He got outside once last year and did get stung, but luckily I got him to the ER in time.

Times are indeed different from when we were children with parents would wanted us out of their hair until suppertime. I remember a creek that ran behind our houses, which as far as we were concerned was the wildest of wild lands. We could spend hours and days just poking under rocks with sticks, counting birds and pretending to fish. In the spring, we’d give each other bouquets of wildflowers or braid them into crowns. It didn’t matter than none of us knew the adult names for things. We had our own relationships with them.

It’s wonderful for sons to do things with their fathers. Older cultures than ours had guides and teachers who prepared the young men to enter adulthood. The arts of the hunt and of defense were taken very seriously. That’s what I think of when you mention taking your son to the shooting range. I imagine a family tradition going back generations that you are passing on, just as you were taught by your father, and so on.

What other traditions do you pass on to him? In the older cultures, they had a reverence for, and deep familial connections with, all the creatures in their environment, including plants, rocks and clouds. That’s why their teaching stories have animals and the sun and moon and stars and even the weather in them.

What stories are we telling our sons and daughters now? As the adults in their lives, it is our duty to teach them about the world they will grow up to take a responsible role in. If all we show them is our fear and anger and hatred, what sort of world are we creating for them?

That reminds me of a story. One evening an old Cherokee tells his grandson about a battle that goes on inside people. “My son, the battle is between two wolves,” he says. “One is Evil. It is anger, envy, sorrow, regret, greed, arrogance, self-pity, resentment, inferiority, lies, false pride, superiority, and ego. The other is Good. It is joy, peace, love, hope, serenity, humility, kindness, benevolence, empathy, generosity, truth, compassion and faith.” The grandson thinks about it for a minute and then asks his grandfather, “Which wolf wins?” The old Cherokee smiles. “The one you feed,” he says.

There’s no denying that evil and danger and loss lurk in the world. They always have and they always will. And yet, even in the worst of times, the human spirit can triumph. An orchestra forms in a Nazi concentration camp. People who have lost everything go house to house in boats to rescue their flooded neighbors. Artists roll out butcher paper in the streets of a favela, so children with nothing can draw and paint. A lone man stands in front of a battalion of tanks invading his country, holding up a single perfect flower.

These are the stories that I encourage you to tell your son. While you’re at it, be honest and tell him that while we can never triumph over evil and violence, we do have within us more light than we can ever imagine. And we can shine that light into any darkness. We can surprise even ourselves with our boundless capacity for beauty, delight and love. Isn’t that the kind of story worth telling? 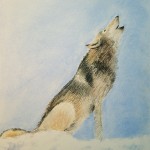