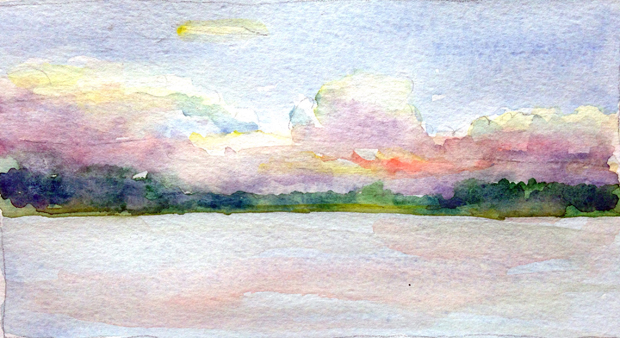 From lazy days of summer, watching sunsets and traveling to other places, to the wrenching events of the fall, one theme kept emerging. We have the power to tell our own stories. We can see the tumult and suffering of our times as an open invitation to reclaim that power.

In July, I speculated on why artists create, given how much work it is to make anything, whether it’s a building or a novel. We do what it takes to serve the muse.

In August, a sunset worked its magical way through my imagination and onto the page as a timeless reminder of the ephemeral.

In September, a viewing of the film, “Merchants of Doubt,” reminded me of the misuse of stories to co-opt, corrupt and sell ideas to an unquestioning audience.

“Americans are in the throes of a giddy intoxication with illusion.” ~ Chris Hedges

In October, this post reconsidering our cultural taboos about crying prompted some rich comments. The very earth on which we depend needs to be watered with our tears. This month also saw an influx of new poetry, thanks to spending time with Dave Abram at our Restorying retreat. Check out poems by Gerard Manley Hopkins, Pattiann Rogers, and Tomas Tranströmer’s “From March -79”.

“Don’t be ashamed of being human, be proud!
Inside you vault opens behind vault endlessly.
You will never be complete, that’s how it’s meant to be.”
~ Tomas Tranströmer, from “Romanesque Arches”

November brought the Beirut and Paris attacks and a renewed wave of anguish and fear of terrorism. I did post about Paris a couple of times, but return here to this post about seeing ordinary reality with fresh eyes. Maybe they are related. Maybe not.

“The real voyage of discovery consists not in seeking new landscapes, but in having new eyes.” ~ Marcel Proust

December saw the debut of “Ask Edith” and her trickster energy. And a post in favor of reclaiming our storytelling powers for ourselves.

Thank you for joining me here on the threshold between stories. I appreciate your reading, your comments and questions, and your sharing this writing with friends. I learn something unexpected with everything I write, and your responses add immeasurably to the experience. Wishing you a healthy and prosperous 2016. May it be a time of wonder and awe, a year of releasing old damaging stories and cultivating new, life-affirming ones.