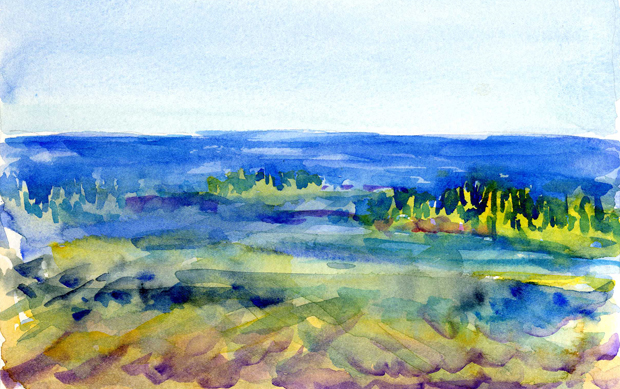 Living under the regime of our current cultural stories gives us an ambiguous relationship with redemption. Take for example the certainty that we’re all going to die. We are so wedded to the material world that any version of an illness or dying story that brings in mystical or supernatural dimensions feels like a forced smiley-face fantasy, hopelessly naïve. The sanctioned story we have of death is that it’s a failure to be avoided, and ultimately, an inevitable slide into nothingness.

This is the aspect of old story that tells us that we are Alone in a Cold Universe. Death is a force greater than us, merciless and impersonal, to which we must inevitably submit. Such powerlessness has no place in a redemption story.

In a recent essay, journalist Meghan Daum wrote about a sudden, catastrophic illness that necessitated a five-day medically induced coma. When she was recovering, miraculously without the predicted brain damage, her friends asked whether the experience had changed her outlook on life. The essay, “I Nearly Died. So What?” was her answer: not really.

This “there is no meaning, only the living of life” mindset strikes me as a healthy outlook when coupled with the knowledge that no one gets out of here alive. Mortality is a given, so we might as well just get on with our day to day.

And yet, it’s human to seek meaning from events. Ms. Daum saw her friends’ questions as their way of saying there has to be a reason for their five days of freak-out over her likely death. Or her own story-making attempts with her mother when she was dying from a rare and aggressive form of cancer in her sixties. Should they have done otherwise?

All the questioning and speculating I did as my own parents were dying leads me to the obvious conclusion that what we notice depends on the eyes from which we look. I know what I experienced was real, but I can’t dictate someone else’s interpretation of those moments.

As a possible motivation of her interlocutors, Ms. Daum observes that Americans love the redemption story; we tend to skew our view of events to the bright side. For evidence, she cites the three women rescued from a basement in a Cleveland neighborhood, where they had been held and tortured for years. When they were freed, the stories were of their remarkable survival, rather than pointing to a breakdown of community. We may love redemption stories for their momentary cheating of death, but we don’t believe our civilization as a whole is redeemable. We know in a fair world those women in the basement should have been spotted and rescued years ago. We’re not blind.

And yet, we continue to be attracted to individual tales of survival and triumph over adversity. Maybe they help us avoid thinking about Big, Scary Realities that we cannot control or outwit. That humans can ever be redeemed is a kind of occasional slipping through the cracks, an outwitting of cruel fate. No wonder we love Trickster stories.

Think about climate change, for example, and about how resigned most people are to it. We seem to have skipped right over whether it’s real or not, straight to it doesn’t matter, anyway, because there’s nothing we can do. Being doomed plays right into our irredeemability. What is there for us, if not redemption? Answer: dystopia.

With all the middle ground between redemption and dystopia, isn’t there any other fate we can imagine for ourselves? Are we so enamored of extremes of contrast that we can’t be bothered to inquire into other possibilities?

I have to be honest (and this will come as no surprise), I do tend to come down on the side of redemption, where the animate world finally gets through to us, invites us back into relationship and this awakening somehow leads not only to our survival as a species, but to joyous reunion with the whole wondrous community of Life. Not that I’m so attached to that outcome. I’m only one person, with one perspective.

When I think of people who might share this view, I think of the Dalai Lama, of Ram Dass and Pema Chodron and Thich Nhat Hahn, all of whom don’t dismiss suffering but instead see it as a doorway into compassion. I also think of friends who work with redemption every day: addiction treatment with acupuncture, restorative justice, organic farming. They prove, one person and one crop at a time, that redemption isn’t an abstract ideal or a fairy story, it’s an ever-present possibility that arises out of great compassion and intentional effort. It’s not always as dramatic as a mountaineer surviving an avalanche and managing, heroically, to trek to safety. That sort of thing is fascinating but easily dismissed for being so far beyond the reach of the average person.

Like everything else worthwhile, the opening is within us. If we don’t see it, that’s not proof of deficient character. It’s probably a natural reaction to the insanity of our modern civilization, a materialistic juggernaut that actively continues to risk human health by poisoning water and air, ignore suffering by insisting on hierarchy and control, and bulldoze rainforests for palm oil plantations to make shelf-stable snack foods or arboreal forests to strip out tar-soaked sand to fuel our power plants and SUVs for a few more years.

Joanna Macy has a nuanced view of this. She knows that we have within us the potential for redemption. She also knows it could just as likely go the other way. Nothing is guaranteed. And yet, the very fact that we can all cite stories of redemption means that it is possible. I move that we keep that in mind for our own future on this miraculous living planet.

2 thoughts on “Are we redeemable?”