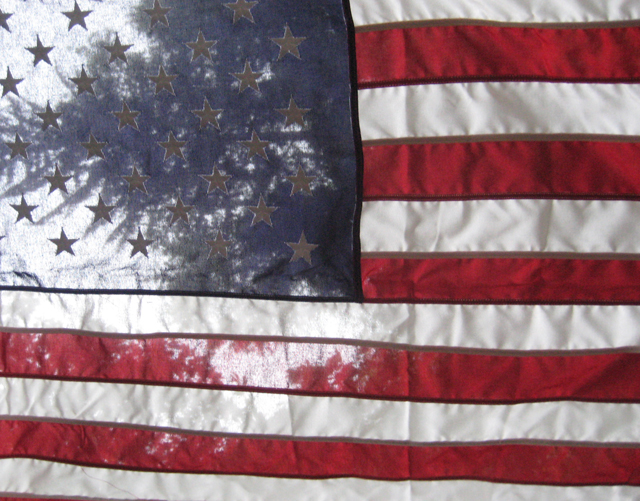 On July 4th each year, we celebrate our independence from a tyrannical king who exploited people who in turn were busy exploiting other people as well as natural resources, all for economic gain and the consolidation of power. The rebellious colonists who would go on to be renamed “Founding Fathers” were well steeped in Enlightenment ideals of individual agency, natural right, liberty, equality, etc. And they were equally adept at tuning out all the incongruities of this worldview: the genocide of indigenous people, and the kidnap, rape, murder, torture, and enslavement of Africans.

Our country was founded on a premise, penned by a slave owner and secret father of mixed-race children, Thomas Jefferson, that “all men are created equal.” And by “men,” he meant—men. White men of European ancestry, to be more exact. He meant land owners, that land having been stolen from the people who lived there for thousands of years before the arrival of those white Europeans.

None of this is news.

I’ve worked on 200-year-old rowhouse renovations where we dug out the dirt crawl space to find wood foundations. Wood beams and joists that had been in constant contact with the damp, insect-laden soil and were rotting to dust. Imagine two, three or even four stories of construction teetering atop such a rotten foundation.

That’s how our country feels to me lately. Maybe we are at such an impasse on so many aspects of our civil, economic and cultural lives because the shaky foundation just cannot take any more weight.

And until we go in and dig out the rot, until we underpin it all with a new, sound and rot-proof foundation, we are in danger of collapse. Or, at the very least, a state of continuing disharmony and disintegration.

Digging out rot means facing the original sins of our country’s foundation: genocide of indigenous people and enslavement of Africans.

Underpinning means coming together in constructive, honest, civil, compassionate, well-facilitated conversations about what we cherish, hope for, fear, and love, about how we intend to work together to achieve something of lasting value. Something we will be proud to pass on to future generations.

The chthonic realm of basements and crawl spaces is the dark underworld of the imagination, a place of mystery, the unconscious, and even death. It’s where Edgar Allen Poe’s madmen buried their victims. Where John Wayne Gacy stashed bodies. Going down there to check on the rotting foundations is not something done lightly. Best bring a lantern and several friends and allies.

South Africa had its Truth and Reconciliation Commission. Will the U.S. ever be able to put aside political theater and posturing that exacerbates our differences? And instead come together to explore past damage and future repair?

I realize this idea is far from the mainstream. It is patently unappealing. But if we want to leave our country better than we found it, we must be willing to muck around in the dark. To admit to crimes of past generations and take steps to atone for them.

As unpleasant as it sounds, this can’t wait much longer. To continue to ignore and do nothing will only push the problem off on our children.

Though there is peril in either choice, there is promise in only one of them. We can do this. We can air out the rot, clean it up, civilize and rebuild. Talented engineers and builders do this sort of work every day. They don’t go in without hardhats and a plan. They put in stout beams and planks for temporary shoring against a cave-in. They get to work. And we can do the same.

3 thoughts on “Rx for a rotting foundation”