So, let’s use imagination for something bigger than a futile attempt at rational understanding. Let’s tap into mythos, rather than rely on logos. From a mythic perspective, we just handed the reins of the most powerful country on earth, and the one with the largest per capita environmental footprint, to the Trickster god of Norse mythology.

Why myth? For all of human history, myth is how we place our lives in a larger context, how we derive and pass on meaning, and also how we balance spiritual and psychological postures for right action in this world and the next. Last spring, Corey Pein tapped into the power of myth when he argued that Trump is not quite the next Hitler, whom Carl Jung compared to the Norse god Oden (Wotan). No, Trump is more accurately Oden’s blood brother, the trickster/shape-shifter god Loki.

This election is the cultural fallout from our having discarded the vital mythic sensibility long ago, as we entered the modern era of hyper materialism and rationalism. In his essay, Pein argues that that it signals a cataclysm of the psyche:

“The more adamantly people deny the influence of unseen forces—that is to say, unconscious impulses—over their own behavior, the more power those forces exhibit.”

Indeed, Trump’s campaign has weaponized our psyches and deployed them against our own best interests. He awakened our national shadow, calling it forth as a macabre army of pathologies to do his bidding. To dismantle the house of civil governance and bring us into chaos.

I have written often here about the power of story. As the storytelling species, our history is written in the use of stories for good and for evil. The more we understand about the purpose and use of stories, the greater our capacity not only to cope with events, but to have greater agency in them. Storytelling has been put to most cynical use in modern advertising, which goes by the slogan, “he who controls the story, wins.”

I think of Nate Silver and his 539 Podcast colleagues as the poster people of a failing civilization that elevates reason and logos over the unconscious and mythos. We put all our faith in smart people like them at our peril. The truth is, there is no rational way to understand this election, not as a whole. Yes, we can understand bits and pieces, like the depressing statistic that 53% of white women voted for Trump, or the map showing people 18-25 electing Clinton 504 to 23. And if more of them had been inspired enough to come to the polls, I would not be writing this. 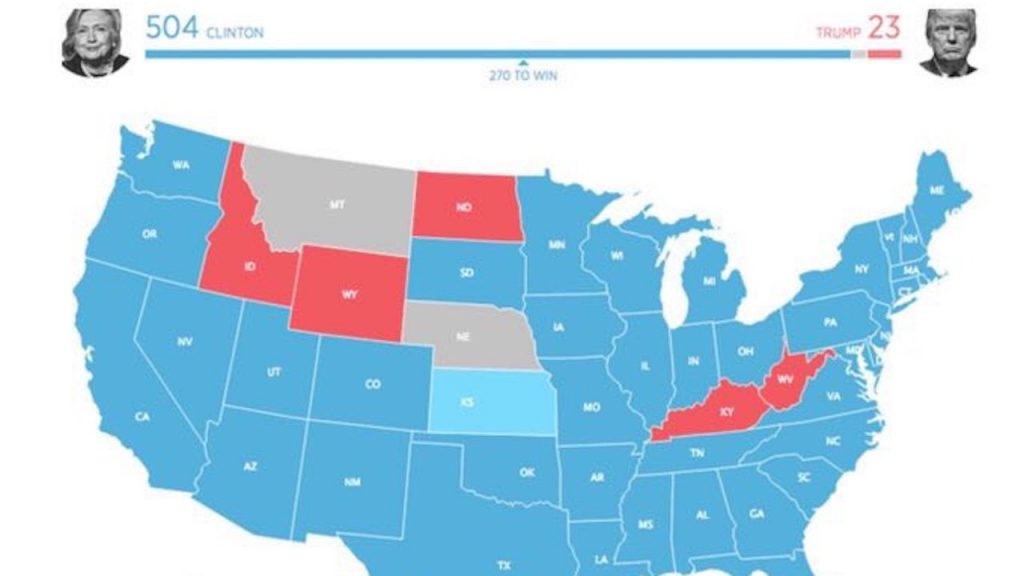 What are we to learn from this election? Besides the social media rants that the Dems should have run Bernie, or anyone but Hillary, or journalists should have ridden Trump harder on all his lies and refusal to release his tax returns. No. The deepest learning will take place an entirely different level—the level of psyche and soul. If this hitting over the head doesn’t get our attention, I don’t know what will. Rational analysis will never yield a full, holistic understanding.  Pein writes:

“To truly understand why people do what they do requires a spelunking trip into a dark realm where the virtue of reason and the clear ties between cause and effect do not apply.”

The trickster figure in mythology, Pein reminds us, “arrives at moments of uncertainty bring change, often of the bad kind.” Loki is the god of mischief and lies. He has the power to mesmerize both supporters and opponents. Sound familiar?

“When considered in the context of the dark psychic undercurrents of the national experience, Trump’s appeal becomes self-evident. Is it really so shocking that a racist, misogynist, mafia-connected, serially fraudulent boor could find a successful place in American life—especially in this age of misinformation and artifice? Loki has awoken. He walks among us, gaining strength, and he doesn’t need your stupid vote, loser.”

At a recent Restorying retreat, we all experienced varying sorts of numinous connections to the wider, breathing, conscious community of life. During a conversation after one particularly mysterious and rich experience, we explored the need for these brushes with the numinous. Anything we can do to invite mythos, to give over to it, to be in realms of soul and mystery, will help counter the 100% immersion we usually have in the world of reason and logos.

Numinous encounters occur in a vast timeless place beyond our worldly concerns. Beyond even climate change and racism, sexism and xenophobia. The universe is vast and we are vast. We won’t get through the next four years unscathed, none of us. We do have complete control, however, of the lenses through which we view what is happening.

Others have written persuasively about the end of civilization as we know it. Not as apocalypse, but as a necessary sloughing off of an old, hardened shell that we are outgrowing, and that if we don’t shed soon, will suffocate us. It is already suffocating our only home, this beautiful blue-green planet.

This is a time of great upheaval. There is at least the great possibility that it will also clear out space and usher in the changes that so many of us have been working hard for.

Meantime, I plan to go back to Norse mythology and study up on how to manage and possibly even to flourish in this time with Loki.

One thought on “Triumph of mythos over logos, or, Nate Silver is not all that”