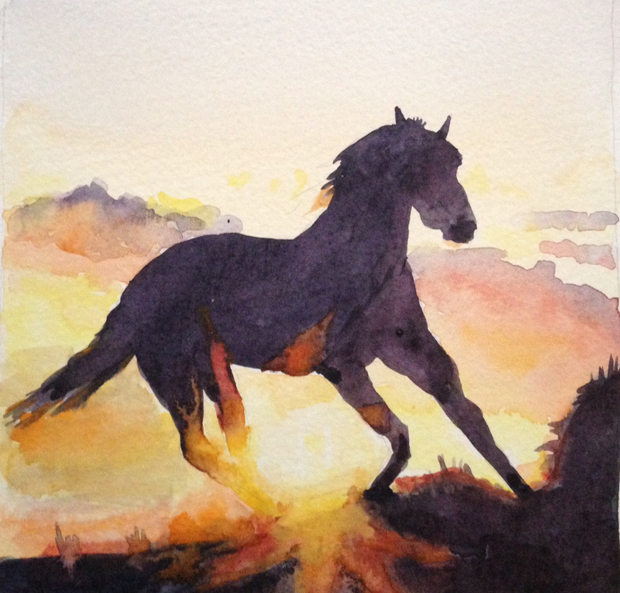 In the final two chapters of his exquisite book, Becoming Animal, David Abram unleashes a series of simple and brilliant observations and proposals for a way forward. One point he makes is that when Copernicus, Kepler and Galileo discovered that the earth is not fixed after all, but rather orbits a fixed sun, the senses were increasingly derided as deceptive and untrustworthy. It was thought that our observations had led us astray into primitive and naïve beliefs about our place in the cosmos, and therefore about ourselves.

It’s true that oral, place-based, indigenous cultures did rely on the body’s perceptions of, for example, the way the sun left the sky and traveled beneath (within) the depths of the earth at night, reemerging in the morning to begin anew its daily transit of the sky. This observation kindled a relational understanding of the fire that is visible in the sky being in league with the fire that is within us. They understood through direct experience that the gravitational pull of the earth on our body is the same attraction between the sun and the earth. Are these two ways of perceiving mutually exclusive?

Abram makes the startling point that our notion of God-out-there-hovering-above-it-all comes from the same disinterested position apart from nature adopted by science. Both are divorced from sensual, material, subjective reality. Science and religion purport to be at odds with each other, but they stem from exactly the same distrust of the bodily, earthly realm of senses and felt experience.

“The hyper-rational objectivity behind a great deal of contemporary techno-science could only have arisen in a civilization steeped in a dogmatic and other-worldly monotheism, for it is largely a continuation of the very same detached and derogatory relation to sensuous nature. If in an earlier era, we spoke of the earthly world as fallen, sinful and demonic, we now speak of it as mostly inert, mechanical, and determinate.”

Our movement away from trusting the body has brought us to a world of abstraction, which reduces the living earth to objects to be studied with as pure an analytical mind as possible. This modern scientific orthodoxy is, thankfully, now being questioned. I wrote last summer about the biologist, Rupert Sheldrake, whose book, Science Set Free, challenges this materialist worldview, and demonstrates how it has been taken to the extreme of dogma.

Abram also points out that the modern preference for abstraction, for distance and dogma, is detrimental to all our relationships—with each other, with the living earth, and even with our own body and imagination. The more we insist on control—of events, of each other, of our environment—the greater the distance between us yawns.

“All of these dodges, all of these ways of disparaging material nature or of aiming ourselves elsewhere, enable us to avoid the vulnerability of real relationship with other persons and places in the depths of this unmasterable world.”

Becoming Animal raises the juiciest questions, and thankfully does not claim to have answers. Dave Abram does suggest towards the end of the book that one way out of this is to become native to place again. To feel it and sense it and strike up relationships with the Others who live here. To discover the stories that dwell in that place. This is a wonderful tonic for our modern rootlessness.

And it’s exactly what we played with when I first met Dave at a retreat in Wyoming, and again last October here in West Virginia at our Restorying retreat with him. The spark first ignited in Wyoming carries through all of our retreats. There, for the first time, I experienced a stream’s gentle encouragement, the play of tiny fish in sunlight, a mother bear disciplining her rambunctious cubs. I was encouraged in this strange business by everyone’s sincerity and lack of pretention. The stories gathered by the other participants came directly out of our immersion into another way of being and relating to place.

Inspired by the mentorship of Dave and others, I have been going off the well-worn path of “civilization” more and more often in my work. Learning to read signs and trust feeling and imagination and senses. Although I don’t know where it’s leading, I have accepted this as my work in the world. Finding fellow travelers is critical, not only as confirmation that I’m not crazy, but to challenge myself to dig deeper and to speak up.

I appreciate the willingness of these wise ones to mentor others, especially those of us who may be more tentative and clumsy in our approach. This is important work in this time of unraveling, to set out living alternatives to the deathly analytical, fact-based, command-and-control methods favored by even the most well-meaning activists. Perhaps the choice to speak up for love will always be controversial, ridiculed as naïve and un-scientific.

In Audre Lorde’s phrase, “The master’s tools will never dismantle the master’s house.” Sometimes I wonder if I’m being called not to dismantle old houses, but to shift in a different direction and build new houses there. Yet, the master’s tools are quite a strong draw, so they cannot be ignored. This was the subject of my essay on drawing in the new issue of the Dark Mountain Journal. I do think it is possible to learn when to use those powerful tools that stem from and tend to create more distance, and when to use other, ancient tools rooted in body wisdom, sensory connection, delight and wonder.