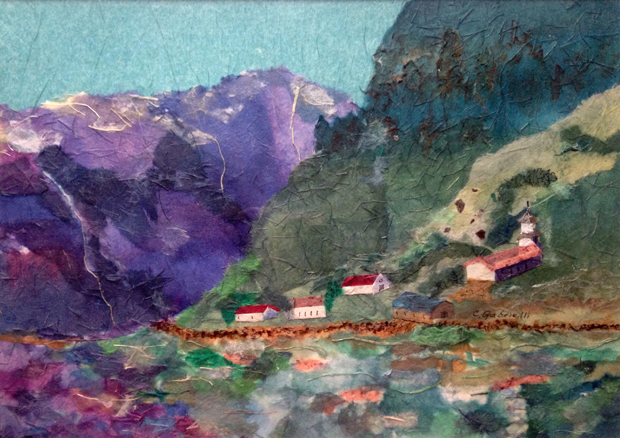 This is one of my mother’s rare collages, which I’m sharing today in honor of her birthday. It reminds me of how much she loved blues and greens. I have a theory about favorite colors, related to this post about the chakras. What if we wear and surround ourselves with certain colors, out of an unconscious need to balance our energies, or because of how dimly they resonate in our body? Maybe our favorite color points to a deficiency or some other fraught relationship with the energy of that chakra.

For me, it’s red, the vibration of the root chakra. I do struggle with being grounded. I have a history of questioning my right to exist, my worthiness. For much of my childhood, my presence felt tentative, provisional, like waking up in a strange place and you don’t know how you got there. We moved every year or two, uprooting and relocating, making it difficult to feel at home anywhere. Our wider circle of relations was far away. We saw them once or twice a year, feeling like outsiders to the close-knit extended Italian family of cousins and in-laws.

As much as she loved blue and green, my mother hated yellow, the color of the 3rd chakra, of will, self-esteem, and confidence. Manipura is the seat of action that promotes and enhances life. It is affirming, fiery, willful, knowing that actions serve a higher good. It is where we digest and break down impressions into manageable bits, allowing us to see multiple angles and form strategies to achieve our goals. The constant renewal in our guts points to flexibility and humility. We take the nourishment we need and let the rest go to nourish other life as compost.

As a child, I was under the spell of safety and security cast by my parents, especially my mother, with whom I spent the most time. She came at life with a “My way or the highway” attitude. She rarely took the time to see an issue from another’s perspective, genuinely believing her own position to be right. In many ways, this served her well. She was no-nonsense, opinionated, and strong willed. But her stubborn exclusiveness was also off-putting and hurtful, creating distance even with loved ones.

It’s likely that her very traditional parents installed stories in her about her role as a woman. Will and action were to that generation “unfeminine.” To this day, we need reminding that women who speak out are seen as shrill and aggressive, where men who do the same are decisive and bold. All my life, my mother sent mixed messages about gender roles. She had a wide streak of independence, even while raising four children, the youngest born weeks after her 28th birthday. She hosted and attended officers’ wives luncheons, decorated the house for holidays, and sewed our clothes. Her Bachelor’s degree in Economics was applied only to household finances. I remember seeing Ms. magazine in our living room from its earliest days, and overheard long negotiations with my father to let her work outside the home once her youngest was in middle school.

Years ago, at a grueling Shadow Process workshop, Debbie Ford said something that cut me to the quick with its truth. My mother gave many overt messages to her three daughters to go out into the world and shine, but the underlying message was: Don’t outshine me. In many ways, cultural norms had dictated her life—wife, mother, duty to family and husband’s career. Perhaps as compensation, she wholly embraced the promises made to the next generation. Her daughters would go out into a world dominated and ruled by men, stride up to the podiums and board rooms, and take those seats of power. We weren’t told, but still understood, that our success would be contingent on playing the game by the men’s rules. Only then could we have it all: education, career, and family.

This narrative left out the messy reality that, at some point, our culture forces most women, and even men, to choose between family and career. Many of us discovered that it’s impossible to give 100% to children, career, spouse, and self. Something (or everything) inevitably suffers. It is exhausting to approach life a contest to be won, or, as modern women do, with something to prove.

None of this is new. Articles and books have been written about our culture’s lack of support for working women. Policy proposals abound to mandate equal pay, family leave, child care, or get more girls interested in math and science. It’s all admirable, even while we shake our heads in frustration that the conversation is still going on. With so much work still to be done, it’s easy to forget how far we have come in the two generations since my grandmother was a girl.

In my mother’s generation, people made sure young women knew what was “ladylike.” There was a great deal of shaming and ridicule to keep women in line and fulfilling expected roles. No wonder my mother couldn’t stand the color yellow. It vibrates with everything that women weren’t supposed to be: strong, determined, opinionated, visible, outspoken, strategic, and willful. I try to imagine what it felt like to be that sort of woman and have to hide it, to constantly keep it in check. I don’t think I could have done it.

Gloria Steinem, that great pioneer of the women’s movement, was born the same year as my mother. In a recent interview, she spoke of her own mother’s depression. She said, My mother suffered from Patriarchy. What a brilliant, precise diagnosis! In many ways, we all suffer from this malady, men included. Just as a rainbow contains all the colors of visible light, no one color elevated as more important or necessary than another, we do well to embrace the diversity of energies within our own bodies as well as in our culture at large. What happens when we stop trying to play pre-ordained roles and step into what feels good and natural?