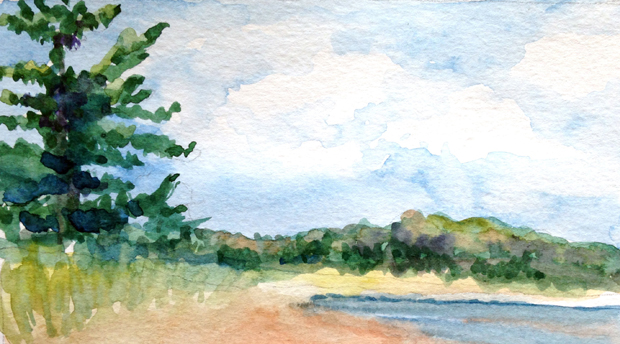 As with Ariadne, Daphne is usually depicted as a passive actor in someone else’s story, in this case, a contest between two males—Apollo and Cupid. She is a victim who must be rescued by another man, her father. Well, this story is about much more than that. It is a story of transformation.

Daphne was another of those independent, love-and-marriage hating young huntresses who frequent myths. She is said to have been Apollo’s first love. It is not strange that she fled from him. One unfortunate maiden after another beloved of the gods had had to kill her child secretly or be killed herself. The best she could expect was exile, and many women thought that worse than death.

But Daphne did not want any mortal lovers either. Her father, the river-god Peneus, was greatly tried because she refused all the handsome and eligible young men who wooed her. He would scold her gently and lament, “Am I never to have a grandson?” But when she threw her arms around him and coaxed him, “Father, dearest, let me be like Diana, and roam free in the forests and fields,” he would yield and she would be off to the deep woods, blissful in her freedom.

Apollo’s love was not brought about by accident, but by the malice of Cupid. Apollo saw the boy playing with his bow and arrows, and being himself elated with his recent victory over Python, said to him, “What have you to do with warlike weapons, saucy boy? Leave them for hands worthy of them. . . . Be content with your torch, child, and kindle up your flames, as you call them, where you will, but presume not to meddle with my weapons.”

Venus’s boy heard these words and answered, “Your arrows may strike all things else, Apollo, but mine shall strike you.” So saying, he took his stand on a rock of Parnassus and drew from his quiver two arrows of different workmanship, a sharp-pointed gold one to excite love, and a blunt lead-tipped one to repel it. With the lead arrow he struck Daphne, and with the golden one Apollo, straight through the heart.

When Apollo saw Daphne, everything ended for her. She was hunting, her dress short to the knee, her arms bare, her hair in wild disarray. Seeing her enchanting beauty, Apollo loved her and longed to obtain her. He thought, “What would she not look like properly dressed and with her hair nicely arranged?” The idea made the fire that was devouring his heart blaze up even more fiercely. He saw her eyes bright as stars; he saw her lips, and was not satisfied with only seeing them. He admired her hands and arms, naked to the shoulder, and whatever was hidden from view he imagined more beautiful still. He started off in pursuit; she fled, swifter than the wind.

Daphne was an excellent runner. Even Apollo for a few minutes could not overtake her. As he ran he sent his voice ahead of him, entreating her, persuading her, reassuring her.

“Do not fear,” he called. “Stop and find out who I am, no rude rustic or shepherd. Jupiter is my father. I am the Lord of Delphi, a great intellect who knows all things, present and future. I am the god of song and the lyre. My arrows fly true to the mark; but alas! an arrow more fatal than mine has pierced my heart! I am the god of medicine, and know the virtues of all healing plants. Alas! I suffer a malady that no balm but you can cure!”

But Daphne flew on, more frightened than before. Most at home with the wild animals of the forest, what need did she have for the achievements of the arts and culture? Even as she fled, though, she charmed him. The wind blew her garments, and her unbound hair streamed loose behind her. Apollo grew impatient to find his love so stubbornly spurned, and, sped by Cupid, gained upon her in the race. It is said he was like a hound pursuing a rabbit, with open jaws ready to seize, while she kept barely eluding his grasp.

So flew the god and the virgin—he on the wings of love and she on those of fear. She could feel his breath on the back of her neck, and her considerable strength began to fail. Suddenly, the trees opened to a clearing and she saw her father’s river. She screamed to him in desperation, “Help me, Father, help me!” Scarcely had she spoken when a dragging numbness seized all her limbs; her breast began to be enclosed in a tender bark; her hair became leaves; her arms became branches; her foot stuck fast in the ground, as a root; her face was lost in the canopy. Only her shining beauty was left.

Apollo watched the transformation with amazement and dismay. He touched the stem, and felt the flesh tremble under the new bark. He embraced the trunk, stroked the branches, lavishing kisses as he had been unable to do before. The stalker! The branches shrank from his lips.

“Since you cannot be my wife,” said he, “you shall assuredly be my tree. I will wear you for my crown. I will decorate with you my harp and my quiver; and when the great Roman conquerors lead the triumphal procession to the Capitol, you shall be woven into wreaths for their brows. And, as eternal youth is mine, you also shall be always green. Your leaf will know no decay. Apollo and his Laurel shall be joined together wherever songs are sung and stories told.”

The beautiful shining-leaved tree seemed to nod her waving head as if in consent. But perhaps that was just Apollo’s love-blind, narcissistic interpretation of what was actually the breeze riffling through the treetops.

And this is where the story usually ends. The virgin nymph, Daphne, forever trapped in a tree by her father. A pretty drastic solution to her problem. But this is actually where things get interesting. Her father knew of her great affinity with the animate world. In that crisis moment, he saw that bark and leaves were the perfect cloak for her to protect herself from the possessive drive of the god Apollo, a safe place to incubate her unique gifts and sensitivities.

Daphne invites us to become treelike ourselves, to feel our own roots stretching deep into the dark earth, the unknown terrain of the unconscious beneath the Dayworld. We can imagine how Daphne felt to have layers of bark protecting her most vulnerable self, stretching her graceful arms out as branches to shelter every sort of creature—birds and squirrels, beetles and bats and bees—and waving her fingers and leaves to gather sunlight.

This is not a once-and-done event, this becoming a tree; it is an ongoing transformation. Daphne lived rooted and growing, through the seasons of loss, of cold, of reawakening, of rain and blossom, new leaves and heat. She was astonished at her wondrous power to draw water and minerals great distances up to her leaves from the earth through her deep roots and millions upon millions of orderly, threadlike vessels in her trunk and branches. She held her leaves high and flat to the sky to absorb oxygen from the air and fire from the sun.

Had Apollo not meddled and made her an evergreen, she would have willingly released all her leaves at the coming cold to feed the fungus and bacteria living in her shadow. She admired the way that the decayed leaves of deciduous trees fed their roots, in a miraculous cycle of death and renewal.

During her time as a tree, Daphne dreamed of her ancestors who lived in the trees, their kinship known and accepted, exchanging life-giving breath. In her way, she gathered countless other Beings to her, giving them all home and nourishment. She loved to scatter her seeds on the wind and watch the new seedlings emerge from the leaf litter on the forest floor.

Eventually, when her incubation was complete, Daphne knew that she must shed her bark. She was a human woman who must emerge from her armor to participate in the world and share her gifts. And so she chose a night of the full moon, the Flower Moon just before Summer Solstice, the time of planting and oncoming heat. After stepping out of the Laurel Tree, Daphne planted her feet and felt more and more deeply into the earth of the Underworld. She stretched her arms high to greet the air and water and fire of the heavens. And every day afterwards, she worshipped the sun by day and the moon and stars by night.

After I told this story at a recent retreat, one of the participants asked me, “What happens to Daphne after that?” Exactly, I thought. What indeed? She likely meant, what happens next according to the myths that have been handed down through the centuries. But since I had made up the last part out of my own imagination, her question meant so much more. It’s just the sort of question I need to be asking of myself. What happens next in this adventure I call my life? May I live into the answer with as much poise, grace, and faith as Daphne has shown.