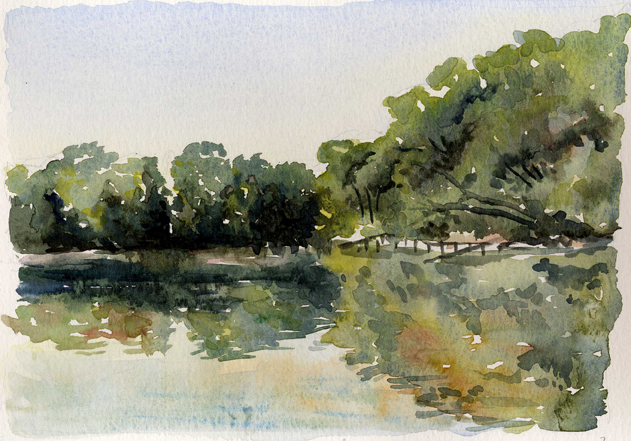 I’ve long been fascinated by the ways that my inner and outer worlds mirror each other. Even way back in college, I somehow knew that annoying people are reflecting something in me that I don’t like. I’m devoted to dream work and my morning journaling for the insights and clarity that often come, and to writing in this blog for the same reason. I tend to regard this reciprocal conversation as a way to diagnose what’s wrong from the inside out, more so than to notice and appreciate what’s right outside, and how it reflects goodness on the inside.

Yet it does work both ways, and it’s going on all the time. When someone I respect questions or refuses to encourage my latest grand scheme, that is showing me the degree to which I am not on board with it myself. But it’s also true that if I look around at my comfortable home, good health, lovely neighbors, engaging work, responsible husband, and yummy food in the fridge—all that is reflecting an inner world that is safe, healthy, and full of good companionship, worthiness, love, creativity, intelligence, security, and nourishment.

This mirroring is a kind of echolocation. A wise friend taught me that we send out vibrations from our inner world all the time. Invisible ripples travel through our outer experiences, giving people permission to treat us however we are feeling inside. If I’m feeling less-than, frustrated or negative about my life, everyone I encounter seems to feel the same way about me. Sometimes it’s downright uncanny how targeted their comments or attitudes can be towards my darkest, most raw places.

Lately my outer world is telling me to speak up, to find the courage to be my authentic self. To be visible despite risk of embarrassment, ridicule, misunderstanding, or shaming with derisive labels. Sometimes it’s a matter of life or death, as with the story of the “Kung-Fu nuns” in Nepal. These non-traditional women live in a monastery, studying and learning the same things that male monks do—very much in defiance of traditional gender roles in the culture. They have been helping to rescue people and recover lost items after the earthquakes, in addition to rebuilding their own monastery. Their martial arts training is a form of meditation, strengthening body and mind, so they can be ready to help during times of crisis.

In his book, David and Goliath: Underdogs, Misfits, and the Art of Battling Giants, Malcolm Gladwell makes the point that innovators (like those nuns) have to be willing to diverge from societal expectations and go their own way. As social creatures, humans have a hard time with this. But if we want to break away from old habits and stories, let alone do something new, it’s essential.

“But crucially, innovators need to be disagreeable. By disagreeable, I don’t mean obnoxious or unpleasant. I mean that on that fifth dimension of the Big Five personality inventory, ‘agreeableness,’ they tend to be on the far end of the continuum. They are people willing to take social risks–to do things that others might disapprove of. That is not easy. Society frowns on disagreeableness. As human beings we are hardwired to seek the approval of those around us. Yet a radical and transformative thought goes nowhere without the willingness to challenge convention.”

As someone who no longer subscribes to most of the “truths” the dominant culture would have me believe, I have to remind myself of this constantly. When I hide and stay silent, I feel more and more resentful and depressed about the state of things. When I speak up, act from my heart, and damn the consequences, I feel lighter and more alive, even joyful. I also need to remember not be so hard on myself when I do hide. Everyone wants to live authentically and struggles with courage at times.

Knowing we aren’t alone has a powerful effect. Witness the sudden, viral popularity of the “courage wall” put up by Nancy Belmont in her city neighborhood of Alexandria, Virginia. Under the hashtag, “WeLiveBig,” she hung a giant chalkboard along a busy sidewalk, with the headline at the top: “I wish I had the courage to. . .” Within hours, it was filled with colorful messages, like “feel beautiful in my body,” or “stand up for myself.” Within days, the wall was featured in the Washington Post, and then on the Today Show. Speaking with Matt Lauer, Belmont said:

“When you make a declaration, there’s power in it. It plants a seed inside of you. When you write it, there’s more energy behind it. And then you share it with a community and you can’t hold it in anymore.”

Whatever messages we send out into the world, there is energy behind them. When I tell a story of being held back by forces outside of me, I have only to remember that the outer mirrors the inner. If I’m holding back or hiding, it’s probably from fear. Courage is not the same as the absence of fear. It’s the willingness to step up and speak out or take action, even when afraid. And here’s a radical thought: maybe the people around us—the same ones who seem to be holding us back, expecting us to play certain roles—are secretly hoping that we shake things up. Maybe they are even depending on us to be ourselves, to speak up and start telling new stories.