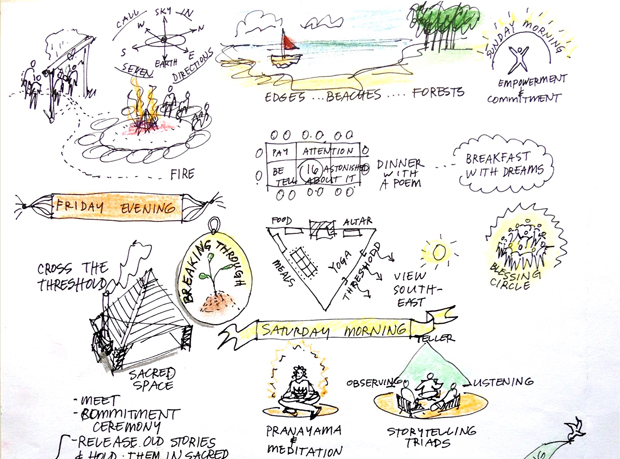 I’ve been participating in a fascinating online course convened by Charles Eisenstein called the Space Between Stories. There is an active forum as part of the course and I’ve been able to join in a few conversations with people from all over the world. One of the topics that’s captured my imagination is our longing for clarity about what to do, once we’ve recognized that the dominant cultural stories, that we were raised on and that constantly surround us, are mistaken and damaging. Once we see that, we cannot unsee it, and can go with the program only at great cost to our sanity and health. Which opens up a rather intimidating question: now what?

Paul Kingsnorth of the Dark Mountain Project, has a humble and inspiring list of five actions at the end of his beautiful essay, “Dark Ecology.” While I can wholeheartedly agree with his assessment, I am also aware that part of living into New Stories is that each of us must find our own way. Not in isolation, surely, but in recognition that our paths are as unique as we are. It’s such a different way of thinking that I’m constantly having to remind myself that’s it’s really okay not to know. Not to know where I’m headed or what will happen along the way, not to know if climate change will get the better of us in my lifetime or my son’s, not to know whether this awareness is going to destroy precious friendships and relationships or whether “enough” people will come to this same awareness to make a difference in all the environmental, social, and economic collapse going on around us. Not to know much at all.

On the plus side, following intuition can be very freeing and even fun, like Improv. It has led me to creating the Restorying retreats with several wonderful collaborators, and we are always adding more. The retreats have evolved in a lovely organic way from an initial idea about storytelling to encounters in wild landscapes with other-than-human beings, exploring the contributions of body wisdom and shamanic journeying, playing with visual storytelling, imaginative backcasting from the future, practicing Interbeing, and Sacred Circle Dance to realign with the rhythms of the earth and ancient cultures.

In a recent email conversation between my original co-creator of Restorying, Jim Hall, and a new collaborator, Duane Marcus, each of them shared something very wise about this. Jim’s perspective draws from years of Soulcraft (with Animas Valley Institute created by Bill Plotkin) and always reminds me of the unseen that is operating upon us at all times.

“No doubt that the Great Turning of Macy will rest upon what’s happening in the arena of the larger psyche of Earth/collective unconscious. That undercurrent is actively working on us as individuals and cultures around the planet, drawing us into greater connection with it in various ways in various places.”

Indeed, one of the most delightful surprises of Restorying retreats is the mystery of it all, that a larger consciousness is having its way with us through these experiences. It’s especially palpable during the storytelling, when people get the distinct impression that the story is telling them. And it happens when we are gathered in a circle around a fire and the stories seem to emerge from the center, come alive, and dance among us. Of course, the encounters in the forest with trees, fungus, streams, animals and all manner of wild beings, which we learned from the gifted guide, David Abram, are always a wonder.

Restorying is not so much doing as it is a way of being, to explore this territory in which we find ourselves between stories. It’s a time and place to cast off old habitual ways of interacting with the world, each other, our bodies, and our thoughts, and to invite fresh stories through ceremony, dance, movement, breathing, listening and presence. We have much to work with, from ancient traditions to new experiments, as Duane Marcus so aptly observes:

“I followed a discussion recently about using traditional ceremonies for different cultures when one is not part of the culture. The consensus was, and I agree, that it is not a good idea to do so. We of European descent and who have lived in the U.S. for several generations have no connection to our ancestral rituals and no connection to the indigenous peoples of this land. Our task is to create new ceremonies and rituals based on our own stories in our own time.”

Only a few years ago, I was immersed in angst, guilt, and anger about the deterioration of our beloved Earth, her climate, her creatures, her wild places, and my own helplessness to do much of anything about it. Not that I wasn’t trying. I just could not square my efforts, and the efforts of hundreds and thousands of colleagues, with the fact that everything is still trending in a downward death spiral. The discovery that the work of our time is to encourage, allow, cultivate, and participate in the emergence of new stories of humility, life, compassion, and interconnection, has renewed my commitment to dreaming.

“If a little dreaming is dangerous, the cure for it is not to dream less but to dream more, to dream all the time.” ~ Marcel Proust

What I love about Restorying and other creative pursuits is that we don’t ignore the realities and effects of our culture’s wanton destructiveness, but instead find a way to make space around all the old stories and to invite a whole new layer of perception to the party. One of the most underrated and untapped faculties we humans have is our imagination. We can see things that are literally “not there,” and invite realities that have no basis in the rational mind. It’s time to open that up even further. Expect more wildness in Restorying. 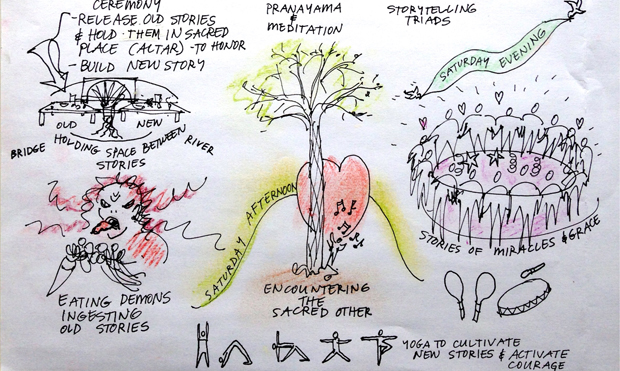