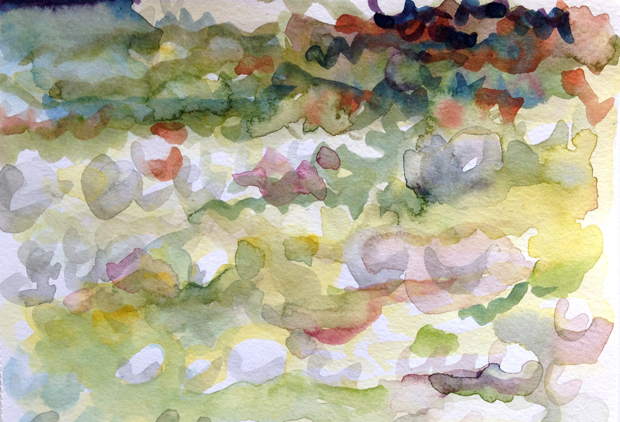 It requires a certain effort to pan out to see a bigger picture. The story can be a lens through which to view an individual life (mine), in the context of a culture and, beyond that, ecosystems and planet and universe. And, zooming in the other direction, inspired by the great short film, “Powers of Ten” by Charles and Ray Eames, to see what goes on beneath the surface of my skin, in those interior realms of thought and belief and intuition, and deeper still to shadow and unconscious, into the place before thought and individuality.

“There is a basin in the mind where words float around on thought and thought on sound and sight. Then there is a depth of thought untouched by words, and deeper still a gulf of formless feelings untouched by thought.” ~ Zora Neale Hurston, from Their Eyes Were Watching God

Dying to old habits and ingrained thoughts is one interpretation of the verse, as it promises transformation and renewal. Sir James Frazer’s classic work compares “primitive” sources of Old Testament stories. Stories of shedding skins are associated with immortality, and humans are included in that history.

Shedding skin is an external act, so that I may relate to the outer world in ways that are fresh and alive. Dead skin cannot feel. It may even harden into armor, and cut me off from experiencing the world in all its wonders.

There is something else here in the evocation of the eternal, a place outside the reach of time, that each of us carries within. That basin, which is really a gulf, an ocean of formless feelings. Is St. Francis inviting me to set aside mortal thought and concept in order to slip into, or access, or contact the eternal that is within me? Meditation and prayer are internal journeys, ways to touch, or even enter, the eternal that flows within and through my depths.

I like the circular nature of this: the words dying, born, and eternal form a wheel that is always turning. We are called to notice that our lives are not linear, as in beginning, middle, end. We are as much a part of the cycles on earth as sunrises, springtime and storms.

“We shall not cease from exploration, and the end of all our exploring will be to arrive where we started and know the place for the first time.” ~ T.S. Eliot, from “Little Gidding,” the “Four Quartets”

Circles and cycles are the way of this world, as mandalas, rose windows, and labyrinths remind us. If the eternal had a form, it would be the circle, for a circle has no beginning and no end. If it had a color, it would be the black of space, the presence of all color. If it had a sound it would be “om,” chanted continuously in a vast meditation hall on the side of a mountain, high above a valley carved by a wild river.

If it was a landscape, the eternal would be a prairie stretching to the four horizons, endless and trackless. Or a mountain range where peak after peak throws itself skyward and ravens wheel on updrafts and show blows off craggy tops in a white halo. Or it would be the ocean herself, her surface one eternity, her depths another, and all of a piece.

The eternal expresses itself through me as love and wonder, as spontaneous ideas seemingly unconnected to the moment just passed. And as ambition that rolls through me as a sourceless energy, a pulse of desire and intuition, a continual letting go. A renewal in every moment, adjusting to outer circumstances.

The eternal is the wind in the sails of a boat, the sound of waves on the hull as it slips magically through the water. The eternal expresses itself always, and most obviously in spring, as yellow buds force their way through winter-weary branches. As daffodils push through cold earth towards the eternal light of the sun. All of this is alive to my notice, yet does not depend on it.

It is dying that we are born to eternal life.

Every moment of every day invites me to die to my distraction, my petty score-keeping, my wish lists and to-do lists, my scarcity thinking, my vast underestimations of myself, and be born to the constant, endless show that is life. Not as a spectator, as a full member, a participant. To put my bare feet into the stream, to stand and balance on the moss-slick stones and teeter towards the middle. To raise my arms high so that the stream may feel verticality, so I can channel the radiance of the sun from my fingertips into the cold rushing water, eternal and new.

This is the final part of a series considering the Prayer of St. Francis.
The first post considers prayer, then moves on line by line.

2 thoughts on “The constant invitation of the eternal”