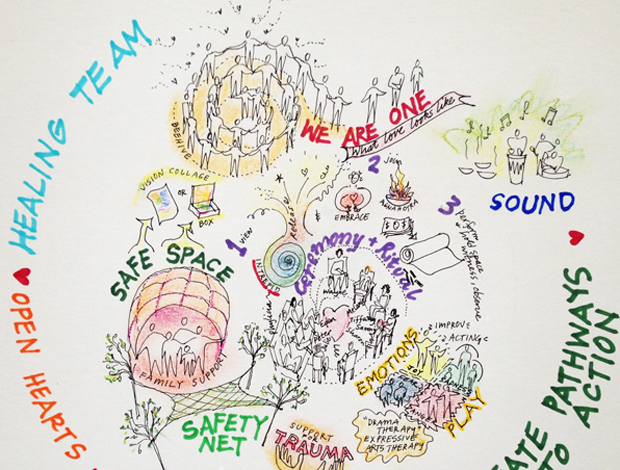 It is in pardoning that we are pardoned.

Under the influence of the Judeo-Christian values of modern culture, I have the habit of believing the story that we are all flawed, that part of my task in this life is to work on myself, to fix my failings, and try to be less bad. While it’s certainly rewarding to grow and learn and increase my awareness and equanimity, there is a big difference when I come at it with the intent of discovering innate capacities, rather than purging unwanted ones, or rooting out evil and unworthiness.

Forgiveness and blame are two sides of the coin of pardon. When I forgive another, I forgive myself, because pardoning comes from a sense of worthiness—my own and another’s. We are all worthy of empathy and understanding, and therefore pardon. Blame is the opposite of pardon. Blame directs anger outward, making an object out of a subject, creating separation and “othering.” Through empathy and compassion, pardon draws both subject and object together through a shared understanding that we are all connected.

A beautiful soul here in Baltimore is the talented dancer/actress/storyteller Maria Broom, who has just published a children’s picture book called “The Village Bully.” It is the story of what happens in a traditional African village when one of their own mistreats another. Instead of shaming and punishing, as our Puritan-informed culture would do, everyone in the village encircles the person and showers love and praise on him or her. They remind her of her innate goodness, her Highest Self, and reinforce that she is an integral part of the community. She is needed.

To refuse forgiveness is to carry a burden of resentment, to allow a wound to fester, and perpetuate separation. In the natural cycle of things, there are births and deaths, injuries and healing, wrongs and pardons. Refusal to pardon may come from a sense of unfairness, of not being heard or understood. Being denied a chance to make my case or tell my story, and even to hear the story of my offender with the ears of my heart.

In Baltimore, we have Community Conferencing, which is based on the Maori justice circle. Everyone affected by a crime (such as car theft) or a disturbing incident (such as bullying or fighting in school) is gathered in a big circle. This includes the accused, the target(s), their parents and mentors, law enforcement, insurance adjusters, business leaders—anyone affected by the ripples of disturbance. One by one, each of them is invited to tell their story of what happened and how it affected them.

Conferencing gets emotional, which is part of its magic. By the end, all the stories have woven a web on interconnection that none of the people had been aware of before. The final step is, as a group, to come up with ways for the offender(s) to make amends. Everyone signs this agreement and they are held to it.

One of the unpredictable results of many of these conferences is that people, who come together often in hostility and skepticism, end up helping each other, especially the accused. There are examples of monetary restitution being facilitated by one of the others present, as when a small business owner offers to hire the accused to help them pay for the damages to a stolen car. Lasting relationships of trust and mutual aid are formed.

Pardon is possible under the direst circumstances, such as the Truth and Reconciliation Commission hearings in South Africa after the end of Apartheid. The desire to forgive derives at least in part from the need to put down a burden, and going deeper, to the longing to experience our connectedness, to heal the “othering” that keeps us separate from each other.

Pardoning gives me the chance to experience another person, and therefore myself, not as inherently flawed, but as innately good and deeply connected in the web of life. Resentment and grudges keep me separate, isolated, and lonely. When I pardon someone, I am helping to heal my own separations from myself and from the living world.

This is part of a series considering the Prayer of St. Francis.
The first post considers prayer, then moves on line by line.