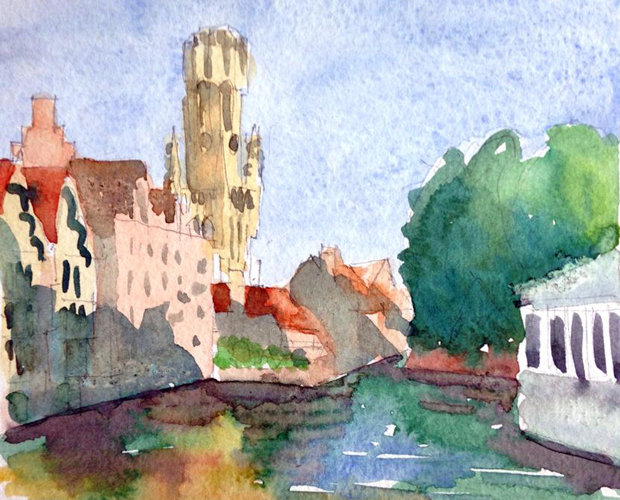 One thing that’s helping me live into new stories is to question received information and to seek out wiser voices, especially those who bring a perspective that goes beyond the our human-centric world. Sometimes that takes the form of a weekend retreat in the woods, a chance to literally get away from “civilization.” At others, it means challenging a “that’s the way we’ve always done it” mentality.

Recently, I was helping my seventh-grade son study for an upcoming economics test, quizzing him on the definitions he had carefully written in his notebook. I was becoming uneasy, tempted to tell him that it’s all just a construct, one way of viewing the world and of organizing materials, systems, and people to fit that view. Here’s what his notes said next to the word “Economics,” which stood out in bold red:

“the study of how individuals, businesses and governments meet their needs and wants based on limited resources.”

And further down. Picture the words “scarcity” and “decision-making” bolded with dark blue ink.

“Economics is based on the idea of scarcity (not enough to go around) and decision making (because of scarcity we must make decisions) to meet our needs and wants.”

On the third or fourth go-round with my quizzing, seeing the word “scarcity” leaping off the page in its contrasting ink, I could no longer keep silent.

“You know that’s not real, right?” I said. “It’s just one idea, a theory of reality. It’s not the full picture. Nature is really not set up that way. Nature is abundant, endlessly renewing itself.”

He nodded, pensive. His other notes made it clear that they are also discussing resources — natural, renewable, non-renewable, human — and I can guess they’ve touched on how humans are overrunning the planet, using up resources faster than they can renew themselves. In other words, he’s getting the distinct impression that, if resources weren’t scarce before humans came on the scene, they certainly are by now. What could I possibly mean, talking about abundance?

How can he comprehend a word like “abundance” when he’s steeping in a narrative about economic systems that don’t count “externalities” like polluted air or subtracted rainforests or toxified waterways?

I found myself fantasizing that his teacher — a woman I know to be quite liberal and free-thinking — would just chuck the classic economics and go straight to Bill McKibben’s “Deep Economy” or Charles Eisenstein’s “Sacred Economics,” or why not straight to “Small is Beautiful,” by the great British economist E.F. Schumacher, with its modest, brilliant proposal for a “Buddhist economics”? Why not at least tell them there’s more to it than our current system measures?

I console myself that he must at least know what he’s dealing with, before he can go out there and change it. This morning, I pulled one of Wendell Berry’s books off the shelf: “Home Economics,” a collection of essays published in the late 1980s. There, in an essay called “Two Economies,” I found the most cogent 10,000-foot view of the situation. I say 10,000-foot view, but it’s a clarity born of intimacy with, and the deepest love for, the land that comes from a lifetime of careful farming.

In this essay, he coins the term, “Great Economy,” inspired by a conversation he had with the great prairie agriculture researcher Wes Jackson. It’s a more neutral name for Jackson’s suggestion, which was “the Kingdom of God,” or what someone of Eastern descent might call “the Tao,” or “the 10,000 things.” As Berry says,

“We can name it whatever we wish, but we cannot define it except by way of a religious tradition. The Great Economy, like the Tao or the Kingdom of God, is both known and unknown, visible and invisible, comprehensible and mysterious. It is, thus, the ultimate condition of our experience and of the practical questions rising from our experience, and it imposes on our consideration of those questions an extremity of seriousness and an extremity of humility.”

He names several principles of this Great Economy:

Berry’s advice is for humans to consider our own economy as a necessarily simplified, abstracted, artificial subset of the Great Economy, a kind of “little economy.” Ideally, it would be understood as an analogue of the Great Economy, designed in deference to its principles, and operated to endure.

Another insight he offers is that a human economy cannot create value. Value can only originate in the Great Economy; for instance, as green cells in plants receive and convert solar energy into sugars, thus beginning the food chain. The human economy can add value by good work: making boards out of trees and chairs out of boards, recognizing “that it was dealing all along with materials and powers that it did not make. It did not make trees, and it did not make the intelligence and talents of the human workers.”

There is so much common sense, wisdom and beautiful writing in this essay, that I’m tempted to quote many more passages. I will leave off with this one:

“There is no ‘outside’ to the Great Economy, no escape into either specialization or generality, no ‘time off.’ Even insignificance is no escape, for in the membership of the Great Economy everything signifies; whatever we do counts. If we do not serve what coheres and endures, we serve what disintegrates and destroys. We can presume that we are outside the membership that includes us, but that presumption only damages the membership — and ourselves, of course, along with it.”

When you need a view of the greater whole, beyond our tightly drawn human-centric world, Wendell Berry always delivers. Would that even 7th-graders could benefit from his wisdom. Whenever I read one of his essays, I find myself wondering why any of us are still lingering on the threshold between the old and new stories. We have everything we need to step into the new story, right now.