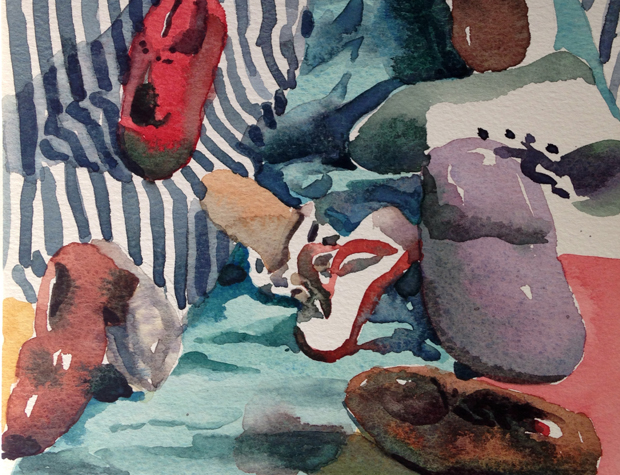 Often, the things I think I’m seeking in life are already present, so close I’m not even aware of them. Like the fish not recognizing the water it swims in. I may jump on a particular bandwagon, like longing for “community,” as a sort of magic talisman that’s going to right the sinking ship of modern civilization, only to be shown, in beautifully concrete ways, that it’s right here, all around me.

Last night, my next-door neighbor and I were both coming home late from meetings. He stopped while closing his front gate to call a hello through the darkness and ask if I was all right. Then he said, “Did you hear about R?” (Our 55-year-old across-the-street neighbor had just informed my husband a few days before that he’d had a heart attack in mid-December, necessitating shunt surgery. It was the first we’d heard about it.)

“Yeah,” I said, “I wish we’d known sooner. I would’ve brought over a casserole or something.” (Truth be told, casseroles are not in my cooking repertoire, but soup is.) We compared our amazed reactions that someone so fit and young would have such trouble — and, on top of it, that he finished walking his dog and drove himself to the hospital, rather than asking any of us for help.

“Do me a favor,” my neighbor said as we walked in parallel up to our two front doors. “Be sure to tell me if you have a heart attack.”

“Okay,” I agreed. “And you do the same.” So much was left unsaid in that brief exchange. After nine years of living side by side, sharing meals, outings, our kids’ growing older, losses, and changes, that’s all that needed to be said. We have their back and they have ours, because we care.

Community is all around me, always. The other night, I went to a gathering of about seventy Baltimoreans, mostly to hear Charles Eisenstein speak. It turned out the real show was hearing the stories of my fellow city-dwellers. At the end of his talk, Charles invited us to think of a story that defies the old programming that we are separate selves living in a hostile universe, competing for scarce goods and just trying to survive any way we can.

Once we’d thought of a story, he invited us to tell it to someone we didn’t know. And to observe what inspired us about that story, as well as to be aware of how we might still be tempted to shy away from it, or hesitate to get involved, or even recoil from what it might mean to step fully into that different way of being in the world.

After all, in this time between stories, there is still some pull — often quite a strong one — towards the old story that tells us there is a certain order and hierarchy to things that is not to be violated. Things are as they are because they’ve evolved from a chaotic, uncertain, primitive past, and they work best this way. Thus, the cynic who says that money is still — and always will be — the most reliable measure of value, or that starting an urban permaculture farm is naïve, possibly irresponsible.

After that exchange, a few people got up on the stage and shared their stories. We heard from a woman who, during the course of a recent project, had formed such a bond with several of the people there that she would literally do anything for them, if they asked. As Charles observed, it almost didn’t matter if the project had been successful or not; the very act of being involved in it forged community.

An African-American lawyer told of his husband’s renegade tree planting, jacking up sidewalks along their treeless street all on his own, with no permits. He had grown up in communist Poland under different cultural stories, so taking matters into his own hands for the benefit of the neighborhood came naturally. Going through proper channels and asking for permission was beside the point.

A third man, also black, had grown up in Baltimore, but left after being brutally attacked, shot and left for dead. Instead of retreating into a world of anger, fear, and resentment, he became curious about what would cause a young person to behave like that. He now works to make mental health care available, free to the public.

“Community” is a word we hear a lot, as a panacea for society’s ills. As in, we are in this fix because community is ailing / broken / dead. Bill McKibben vividly says that fossil fuels gave us a temporary leave from community: we can pretend we don’t need each other because we have cheap energy to provide food, clothing, shelter, employment, transportation, childcare. For a while, we didn’t need to ask for help. Which seemed like a good thing, since one of the stories in our culture’s operating system tells us that to ask for help is a sign of weakness.

It was a powerful experience, being part of that gathering, witnessing their stories, so honest and full of compassion and vision. Storytelling allows us to enter into the teller’s experience, to feel what they are feeling. Like other artistic mediums, it also allows different versions of reality to co-exist, even conflicting versions. There is the story, and the subtext of the story, its hidden meanings, and the implications of that story’s truth — how it challenges the status quo and/or rewrites the buried code of a culture.

“And it’s a human need to be told stories. The more we’re governed by idiots and have no control over our destinies, the more we need to tell stories to each other about who we are, why we are, where we come from, and what might be possible.” ~ Alan Rickman

The very act of witnessing another person’s story creates a bond. Reflecting on all of this, it does seem possible that we could story our way to a stronger, more vibrant, health, and just community for all.

2 thoughts on “Storying our way to vibrant communities”