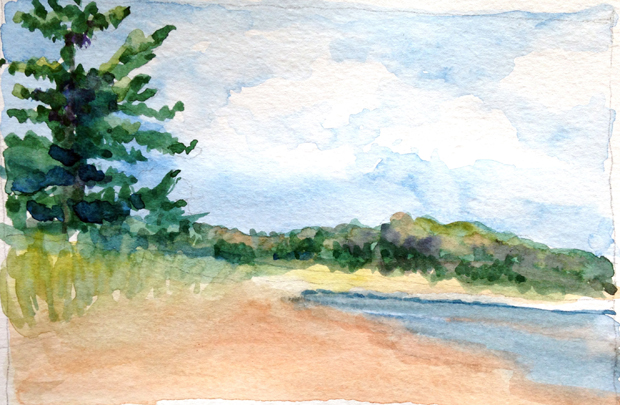 Conservation International has just unveiled a new message campaign, “Nature Is Speaking,” which has well-known celebrities speaking as and for “nature.” They each voice a character, such as Ocean, Redwood, or Soil. The sad thing is, there isn’t a speck of love here, and even the films’ expansive cinematography does nothing to draw you in, or elicit any emotion besides dismay and possibly guilt.

At the end of each spot comes the tagline, “Nature doesn’t need people. People need nature.” It’s the meanest sort of message, casting Nature as the all-powerful, disapproving parent who indulged us for too long and is now cracking down. Taking back her power, or at least throwing it around to scare us straight.

Harrison Ford’s Ocean is a thuggish intimidator intoning vague threats in a gravelly voice. He and Ed Norton’s Soil convey the attitude, “we don’t give a shit about you,” and say things like, “I suppose you still want to eat, right?” and “I covered this entire planet once. I can always cover it again.”

To be fair, the Redwoods one is a bit gentler. But even there, humans are portrayed as the way-errant loser neighbor who inherited a nice house from his aunt and now hosts twenty-four hour, weeklong parties with plenty of meth smoking and booze, loud music and seizure-inducing video games. The human race as Jesse in Season 4 of “Breaking Bad.”

I’ve thought a lot about this message, that humans are an aberration, even a blight on the planet. An experiment in consciousness and manual dexterity that has gone horribly wrong. As tempting as this is — and as true, in so many ways — it’s not close to being the full story. And to miss that story would be a tragic mistake.

It’s as misguided as it is counterproductive for conservationists to project their rage and fear onto “Nature,” to presume to speak through a thoroughly human voice, and to package it in these beautiful and depressing film spots. This campaign cannot advance the shift to new story, because it is made entirely from the perspective of the old stories of separation, power-over, good-versus-evil, control and hierarchy.

What a missed opportunity! It’s understandable that all those smart people in conference rooms thought this would be a kick-ass campaign. But had they actually gone and spent time with Ocean or Soil or Redwood, had they set aside agendas and listened with ears of the heart, with sincerity and humility, they would have heard an entirely different message. Not a projection of their own shame, fear, guilt and anger about the way humans (all of us, including the creative team behind this project) are treating the planet.

The message would be one of love and welcome. And guidance for finding our way back from separation to the interconnection and belonging that are our birthright. And reminders of our kinship and reciprocity with the natural world. This may sound like rainbows-and-unicorns wishful thinking, but it’s an extrapolation of real experiences with the animate community of Life. Yes, I am a rank novice at it, but I can say this for sure:

Nature is likely alarmed by our ego-saturated ignorance and our destructive actions. She is trying all sorts of ways to engage us and pull us out of our materialistic stupor, but she is not petty and vindictive. She would never say, “You need me but I don’t need you.” What kind of dysfunctional power-over relationship is that? It’s a marriage doomed to fail, headed for the ash can. This message certainly doesn’t inspire me to humble myself and try to heal the separation.

As Mother Nature, Julia Roberts pulls rank: “I’ve been here 22,500 times longer than you. I don’t really need people, but people need me.” It strikes me as oddly appropriate that they used major celebrities for this campaign, because they are casting nature herself as a celebrity: unreachable, “out there,” just as Julia Roberts and Penelope Cruz and Kevin Spacey are unattainable icons, larger than life. They’re better than us; they know it and we know it. They can take us or leave us. Whatever.

It’s this superiority and indifference that are so troubling. Mother Nature is imagined as saying, “One way or another, your actions will determine your fate. I am Nature. I will go on. I am prepared to evolve. Are you?”

On one level, she has a point, but where’s the compassion? Yes, nature can seem vengeful and that is the stuff of mythic stories. But she is also a mysterious, all-loving and infinitely creative force and, as part of nature ourselves, we too have that potential and that capacity. Speaking to us as errant children in need of a Time Out only perpetuates the stories that brought us factory farming, deep ocean oil wells, tar sands, mountaintop removal coal mining, and massive extinctions. The stories that brought us to this point cannot deliver us from those outcomes.

If we are to evolve, we need different stories. I choose to align with the story that we belong here, we have a purpose, and we are loved. Yes, we have lost sight of those truths and have caused great damage. It’s equally true that we cannot be intimidated into doing the “right thing.” When was the last time that worked for you?

Maybe this campaign is like the first step in a 12-step addiction recovery process, or, better yet, it’s the Intervention. We’ve been gathered in a living room somewhere, with concerned friends and affected family members. Nature speaks first:

“Humans take more than their share. They poison me, then they expect me to feed them. Well, it doesn’t work that way. If humans want to exist in nature with me and off of me, I suggest they listen close. I’m only going to say this once. If nature isn’t kept healthy, humans won’t survive. Simple as that. Me, I could give a damn. With or without humans, I’m the ocean. I covered this entire planet once. And I can always cover it again. That’s all I have to say.”

Now it’s our turn to speak, and to act. Will we get all defensive, or will we put ourselves in our victims’ shoes and acknowledge the damage we have done? From where I sit, it could go either way, and I don’t expect a definitive answer in my lifetime. I do know that, as the accused, I will enroll in any program that helps me to see myself as interdependent with the whole, sacred, animate world, that gives me ways to experience that connection, and teaches me rituals and ceremonies so I can express my profound gratitude, awe, and wonder at being alive on this amazing planet.

3 thoughts on “Nature is speaking, but I think you heard her wrong”