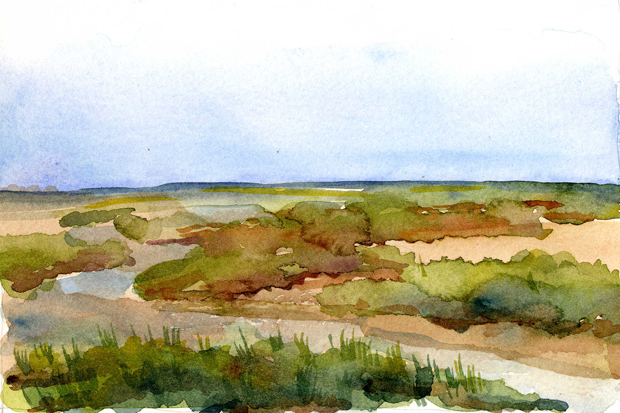 I’m in a rain-misted spring forest examining a batch of cheeky green fungus that has flagged me down. In sliding my eyes along the fallen branch it’s growing on, I notice a snail shell and marvel at its size and intricacy, thinking it’s exactly like a shell one might find along a beach. Then I notice a white fungus, same shape as the green, but with wedding-dress frills instead of garden-party apple green flounces. And just like that, metaphors have crashed the party.

This setting teaches me that metaphor is a habit of culture, a way of mediating direct experience and keeping my distance with cleverness. If I resist the temptation to raise a layer of artifice between myself and these strange Others (fungus, snail, fallen log), I can be more present to what is actually before me. I see it as a first step towards healing my separation from such places and their inhabitants, to feel like I actually might belong there. Or at least be a welcome guest.

Marie Howe opened my eyes to this habit when she told an interviewer how she teaches poetry. For the first weeks, she asks her students to write ten observations of the actual world, using no metaphor. This is a challenge for them, as she says:

“To resist metaphor is very difficult because you have to actually endure the thing itself, which hurts us for some reason.”

In the film “Il Postino,” an earnest young postman Mario asks the great poet Pablo Neruda if everything in the world is a metaphor. Neruda doesn’t answer, but it struck me as remarkably parallel to what Billy Collins said about comparing everything to everything else.

I wouldn’t say the world itself is a metaphor, but certainly it is often – consciously or unconsciously – filtered through metaphor. My mind starts to create distance by naming objects like “tree,” “stream,” or “hawk,” and the gap widens if I use metaphors from human culture, as though they are the only way I can relate to these beings. Before words, there is emotion, and that’s all I need for a true connection. It’s true that if I want to capture a moment or share it with someone, I need some tools. Words are one possible choice, as is painting or music or dance.

At their best, words can evoke images that elicit the same intensity of emotion as the original encounter. I can see why the poet Gerard Manley Hopkins experimented with words. He was after sharing his ecstatic connection and fleeting sense perceptions, the awe and wonder of landscapes and the creatures who live in them.

This is not an injunction against metaphor; it’s a caution to avoid it when in the territory of Others. Whenever I’m out in the woods, encountering the beings who live there, I challenge myself to be present, with no abstractions, no interpretations. This practice requires intention, open-heartedness and full engagement of the senses. If I must use words, simple language seems a form of paying respect, of giving my subject the full measure of attention he or she deserves. The less mediation, the better.