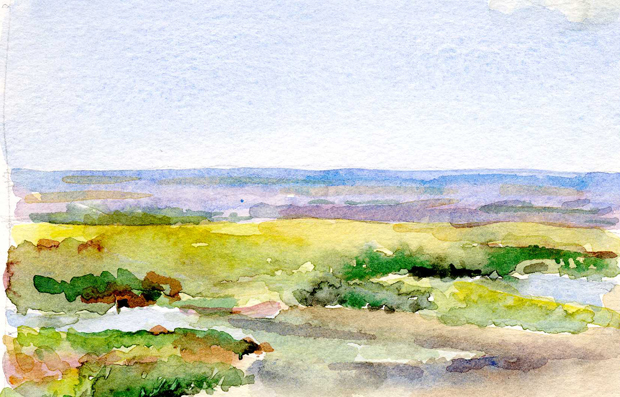 One fascinating thing the Hopkins researcher found was that the prefrontal cortex shuts off during these improvisations. That’s the part of the brain housing our self-awareness and social control, among other functions. He explains:

“During improv, the brain deactivates the area involved in self-monitoring and observation, while cranking up the region linked with self-expression. So essentially, a musician shuts down his inhibitions and lets his inner voice shine through.”

No wonder it’s so refreshing and uplifting to be in that creative flow in any medium. It’s a respite from the bossy, critical part of our brain where “executive function” lives. The flow state of creativity is a waking dream, a trance state that just plain feels good.

In that TED segment, both Keith Jarrett and Sting say that creativity is risk-taking. Jarrett is willing to go out on stage and just fail, utterly. That full commitment is a critical part of the equation; trying to stay safe indicates that your prefrontal cortex is still firing, choking off the freshest creativity. Innovation is only possible when you’re risking everything.

It’s a fascinating paradox: to be great at improvising and innovating, you have to know your medium so well you can just play. At the same time, knowing something that well carries with it the danger of complacency and, worse, expert status. Status and expertise can kill creativity, so the more you know, the greater the risk you have to take to shut off the social controller.

Sting echoes Jarrett’s comments about being a channel and having no idea what the outcome will be. This is important for me to remember, as someone who has a lifelong habit of trying to play it safe. The shining moments come not out of safety but from tossing aside all learned and inherited methods and techniques and leaping into the unknown.

It’s not a random act, though. Fueling every creative person is a great longing, a desire to express something, a love for the world and its wonders, an intuition about a pattern, a juicy question or a new idea.

The motivations are a varied as the means of exploration, but I would say there is one thing fundamental to all creativity and that is love. My heart sings when I’m in the flow. I’ve come to rely on that feeling as a bellwether, a guide telling me I’m on the right track, even if I don’t know where it’s going. I can feel where it’s coming from and that’s all that matters.

One thought on “The joy of creativity, risk and improvisation”