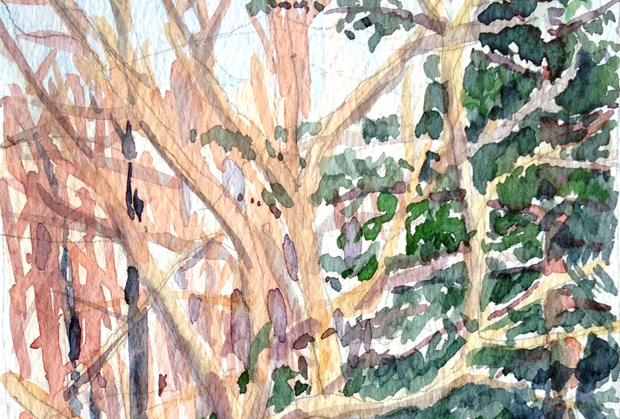 I’m by turns curious about and frustrated by the way modern culture insists on scientific proof before an experience or phenomenon can be considered “real.” And while absence of proof is hardly proof of absence, there is considerable resistance to believing the unmeasured. This instrumentalism is one of our civilization’s dominant stories, part of the operating system behind our rationality-soaked worship of science.

And so we are driven to shine light on the unseen, to reduce mystery to chemistry, biology or psychology. Barbara Ehrenreich, author of the 2014 book, Living With a Wild God, is a good champion of the idea that faith is intellectually lazy, and prefers the question, “Why believe when you can know?” And yet, her book and John Geiger’s The Third Man Factor both admit that certain numinous and mystical experiences elude fully rational explanations. Michael Pollan’s recent piece in The New Yorker, “The Trip Treatment,” is another intriguing foray into the science of human spirituality.

This article looks at medical schools that are studying various clinical uses of psilocybin, a psychedelic drug that had been widely available, and legal, until the 1970s. This research is taking place in such prestigious institutions as Johns Hopkins and N.Y.U., the latter covered in detail in this story for its studies on easing the anxiety and depression of cancer patients.

Along with psychiatrists and psychologists, we meet a neuroscientist who is studying the unconscious mind, using cutting-edge MRI imaging to discover which parts of the brain are affected, and how. Significantly, there is a part of the brain that was first described in 2001, called the “default-mode.” This is our orchestra conductor, the captain of our ship, our ego, if you will. Drugs like psilocybin inhibit its activity, which accounts for the loosening identification with the self, or in psychological (and spiritual) terms, the Self.

The researchers in Pollan’s article express amazement that the drug has such lasting, positive effects after only one or two doses, that can last for months, even years. No other psychiatric drug even comes close. I do wonder about the profound changes in consciousness that could occur if more people, even healthy ones, could have that experience, along with careful guidance and monitoring.

My imagination spins off into a short story about a town that experiments in this way and births a new culture. In true Ursula Le Guin form, wouldn’t there be a downside? Consequences for taking a shortcut to enlightenment?

And here another part of the dominant story rears its head: nothing so momentous could possibly be this easy. Yet, my challenge to that is also steeped in a modern story, one that says we can simply change our brain chemistry, tinker with biology through a miracle drug — in other words, a purely materialistic perspective that leaves out the millennia of human experience with such sacred drugs as doorways and guides to the world of spirit. Simply lining up a bunch of healthy people and administering the drug doesn’t change the fact that we live in an aggressively unhealthy culture. Even the scientists in Pollan’s story were circumspect:

“All spoke of the importance of well-trained guides (N.Y.U. has had a training program in psychedelic therapy since 2008, directed by Jeffrey Guss, a co-principal investigator for the psilocybin trials) and the need to help people afterward “integrate” the powerful experiences they have had in order to render them truly useful. This is not something that happens when these drugs are used recreationally. Bossis paraphrases Huston Smith on this point: ‘A spiritual experience does not by itself make a spiritual life.’”

Towards the end of the article, Pollan gets mixed opinions on whether society is ready to take a new approach to studying psychedelics. One doctor says yes, these are very different times, far more attuned to mindfulness and the realities of life and death. Another, Dr. Bossis from the N.Y.U. study, is less optimistic:

“This culture has a fear of death, a fear of transcendence, and a fear of the unknown, all of which are embodied in this work.”

This ambivalence is echoed by a Dr. Griffiths, the scientist running the study at Johns Hopkins:

“The first time I raised the idea of ‘the betterment of well people’ with Roland Griffiths, he shifted in his chair and chose his words carefully. ‘Culturally, right now, that’s a dangerous idea to promote,’ he said. And yet, as we talked, it became clear that he, too, feels that many of us stand to benefit from these molecules and, even more, from the spiritual experiences they can make available. ‘We are all terminal, Griffiths said. ‘We’re all dealing with death. This will be far too valuable to limit to sick people.’”

In this threshold time between the old story that matter is separate from, and superior to, spirit and the new story (with ancient roots) that sees all of matter as embodied spirit, we offer retreats to give people a tangible experience of Interbeing, of communion with the animate world via the senses and imagination. Any way in to such an experience seems a valid prospect, especially if it leads to questions about the stories we live under. What’s wrong with a little chemical boost to counter centuries of conditioning by a false story of who we are? As long as it’s understood as a means to an end, not the end in itself.

Focusing only on biology and chemistry runs the risk of cutting us off from the possibility, indeed the understanding, that psilocybin is but one plant spirit among many that wants to help us to reconnect, to experience the wonder and sacredness of our kinship and reciprocity with all of Life. Like some quantum physicists before them, maybe these researchers have stumbled onto the fringes of something strange that defies rational explanation. I see it as a good sign that their work has the potential to disrupt long-held cultural values as well as raising more questions than it answers.

One thought on “Could psilocybin be a shortcut to new stories?”